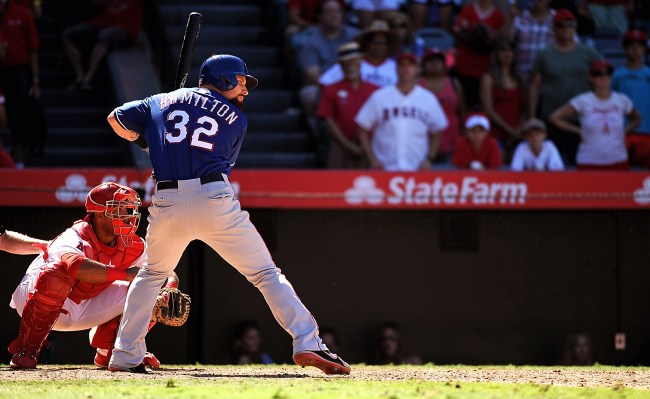 The tale of Josh Hamilton is one that really should be made into a movie or a mini-series. His story is one of the wildest, most inspiring tales in the history of sports. It really is the stuff of legends.

Following his senior year in high school, Hamilton was considered to be on the of the top two prospects available in the 1999 MLB draft (pitcher Josh Beckett was the other), and so Tampa Bay made him the number one overall pick, giving Hamilton a $3.96 million signing bonus.

After being voted the Minor League Player of the year by USA Today in 2000, Hamilton’s career started to go off the rails in 2001 as drug and alcohol abuse sent the top prospect to rehab for the first time.

In 2002, Hamilton was still playing well, but his season came to an early end due to injury and his behavior forced the Rays to send him to the Betty Ford Center for more rehab.

During 2003 spring training, Hamilton failed his first drug test and repeatedly disappeared without a trace before finally taking the entire season off for “personal reasons.”

In 2004, during spring training, Hamilton was suspended and fined for violating the MLB drug policy. A month later he was suspended for the season after failing two more tests.

For almost three years, Hamilton did not play baseball, and in 2005, in the midst of trying to make it back, he was arrested for damaging property and eventually suspended by MLB again for the entire 2006 season.

Finally, in 2007, after being discarded by the Rays, Hamilton made his Major League debut with the Cincinnati Reds who acquired him for $100,000.

In 2008, after being traded to the Rangers, Hamilton was hitting the ball so well that at one point during the season he became the first American League player in 107 years to receive an intentional walk with the bases loaded.

Now 38, and having not played since 2015, Hamilton will be inducted into the Texas Rangers Hall of Fame on August 17th of this year.

As a result, he was asked to participate in a conference call set up by the team to find out what he’s been up to for the past three years or so.

“I’m doing good,” said Hamilton. “I’ve been making up for lost time with my girls. Got a ranch towards College Station, spending time there. Moving my parents out here, building my house on the ranch. Just being dad.”

Being dad means getting the odd look from people in town now and then when he ventures to the store.

“That’s one of the things where everybody always looks at me like, ‘What are you doing here?'” he explained. “I’m like, ‘I’m a person, and I eat. I have to shop for my kids.”

Hamilton missed the entire 2016 season recovering after having knee surgery three times in nine months, and tried to come back in 2017, but his knees wouldn’t allow it.

So, when asked how he was feeling these days, Hamilton said with a laugh, “I’m a freakin’ beast. Working at the ranch, it keeps you in shape. [I’m] 6’4″, 250 pounds; I feel good, strong. The knees actually feel way better since I quit running and all that, so hopefully they’ll stay good for a long time.”

He also admitted that he thinks he could probably still come back and rake as a DH.

“I’d be lying to you if I said I still didn’t feel like I could get out there and play,” said Hamilton. “Then I remember why I quit: just to be there for my girls. If I did try to play again, it would take me away from my girls, so that answers the question pretty quick.”

Hamilton also addressed the elephant in the room. His ongoing recovery as a drug addict.

“I’m doing good. You can only keep so busy, so there’s always thoughts about doing stuff I shouldn’t do. But that’s going to be the rest of my life, so I don’t even think about it. Don’t react, don’t do it. It’s all good,” Hamilton expolained. “It’s the same old thing: Surround yourself with good people – people who love you, people who want to see you do good. And become a good, contributing part of the community. And that’s why I’ve chosen to stay up in Keller and be involved with my girls’ sports things and the things they do in school and all that. So, yeah, man. All good.”

Like I said, his story really needs to be made into a movie or something.

Previously in “Where Are They Now?”
• The actress who starred as The Empress in The NeverEnding Story
• Ashley Harkleroad, the tennis phenom who posed for Playboy
• The actress who played Six on Blossom
• The five sons who appeared on Malcolm in the Middle
• Little League legend Mo’ne Davis
• The creepy girl from The Ring movie
• The “Overly Attached Girlfriend”
• The little blonde girl who played Eminem’s sister in 8 Mile