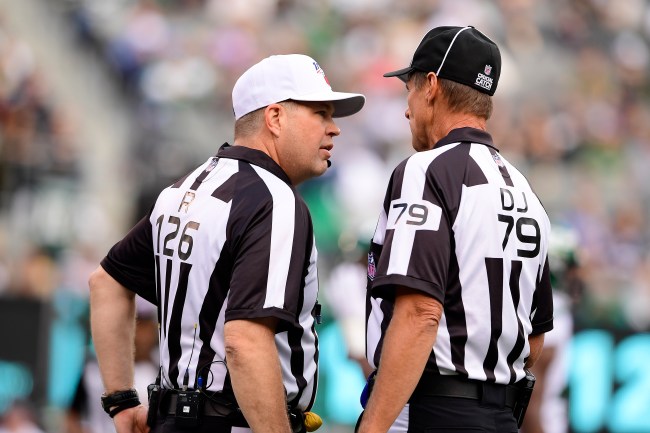 NFL refs have had a forgettable season, and Week 6 games may have been the tip of the iceberg. While we’ve seen some crews be generous tossing out penalty flags or completely missing some calls, the Monday Night Football game between the Detroit Lions and Green Bay Packers sort of had a mixture of everything in it, which fans were quick to point out.

After a bunch of bad calls went against the Lions, people like Desmond Howard and Barry Sanders are now calling out NFL refs from the game, with the former suggesting an investigation gets underway to check the refs’ bank accounts, and the latter just ripping the zebras for being piss-poor at their jobs. Overall, it’s a bad look for the entire league, as, once again, a close game was decided by officials and not the two teams on the field.

One of the plays during the Monday Night Football game last night that has fans baffled is one during the second quarter in which the Packers clearly had 13 players on the field. For those who don’t know football rules, uh, yeah, that’s two more than what’s legal. Here’s a picture of the play below, where 13 Packers can clearly be counted on the field at once.

you’re telling me the packers can just play with 13 GUYS on the field and NO flag? was the back judge just picking his ass pic.twitter.com/dF3nBhSg7m

So why the hell didn’t NFL refs in the game throw a flag? While Clete Blakeman’s crew did play a huge part in the outcome of the Lions-Packers game with their questionable judgement, this play was actually called correctly — which is better described by the official NFL rulebook as to why refs got it right:

Does that make more sense? If not, ESPN’s rules expert John Parry explained that the refs are told to throw the flag once the defense is “in formation” or the ball is snapped. Since Detroit was in a hurry-up and Green Bay is scrambling to line up before the ball was snapped, the Lions were never actually “in formation,” as Parry puts it. A timeout was called before the play was run.

Although the image itself looks terrible for NFL refs calling the game last night — and they did a bad job the entire contest, which, sadly, has been a theme all season long — this is one where the officiating crew actually did do the right thing when it comes to the letter of the law. Still, Lions fans are still going to be upset (rightfully so) that their team got robbed in the grand scheme of things.