Rob Gronkowski Tells The Media At Super Bowl LIV He Doesn’t Regret Retiring, But Once Again, Won’t Rule Out A Return 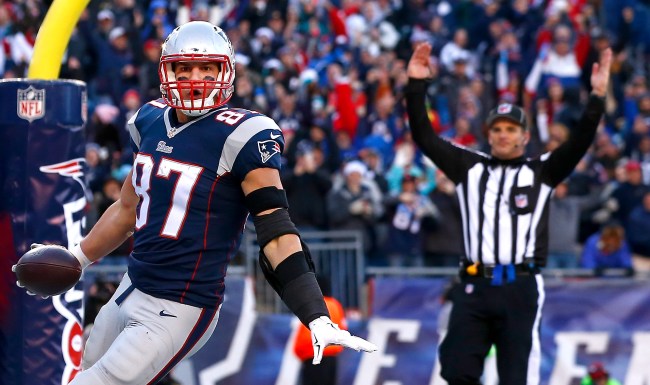 Stop me if you’ve heard this one before. Rob Gronkowski says that while he’s currently retired from playing in the NFL, he isn’t definitively ruling out making a return.

While making an appearance for Fox Sports at Super Bowl LIV in Miami, Gronkowski was asked if he has any misgivings about retiring.

“Oh, no, not at all. No regrets at all. Feeling good,” Gronk told the media, reports ProFootballTalk. I knew that’s what I wanted to do. I knew that that’s where I was headed, and no regrets at all, man. Been having a good year. I felt like that was the time. Had a month or so after the season and just felt like that was the time. Feels good to know that it was a good decision.”

Even with people like Tom Brady and Robert Kraft all but begging him to come back and help the New England Patriots during the playoffs?

“Oh, man, I don’t know. I’m a young guy — 30 years old,” Gronkowski replied. “I still love to workout, stay in shape. Like I said, I’ve answered this question many, many times. I will never say complete no, because I love playing sports. I love competing. It’s still what I do to this day. No matter what it is. If I’m out playing basketball. I’ll answer this the same how I always answer it: If I ever come back, and I feel like I have that passion, that strong passion for a continued time, not just one day or like one hour, like, I need to play football again, and I’m talking about continued passion for about a good week or a good month or so. Then, I would think about truly coming back to football.

“As of right now, I’m set where I’m at. But I know I’m a young guy, and I still love to stay in shape and compete, so if that passion, that fire ever comes back, then that’s when I would come back to football.”

Makes sense. After all, acccording to Gronkowski, he would only need a month to get back in football shape, plus he’s solved his concussion issues and fixed his CTE.

If nothing else, he could always come back and just help out in the New England secondary, right?

Sorry, Patriots fans. I just had to.