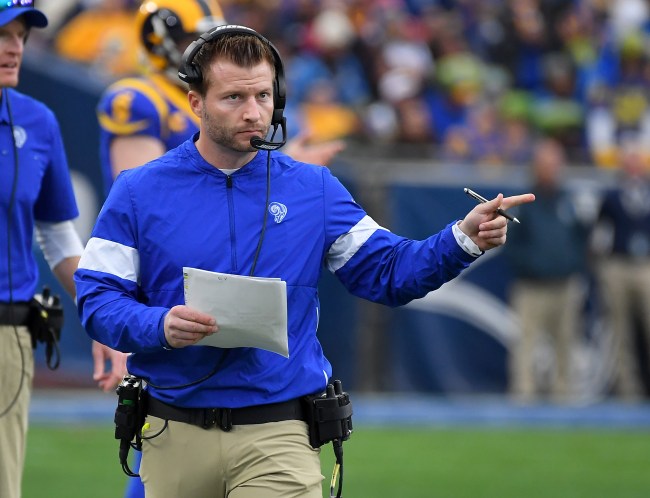 Rams head coach Sean McVay is a football genius. Like, the dude eerily resembles Rain Man when it comes to dissecting plays and understanding situations during games. We’ve seen this weird (and impressive) talent of his before, with McVay recalling plays from his high school days, proving that he’s pretty much a mad scientist out on the gridiron.

Hell, McVay’s own mind has gotten him in trouble before, too, with the coach admitting that overpreparing his team for the New England Patriots in Super Bowl LIII actually cost the Rams a chance at winning the Big Game. Can you imagine being that organized and that detailed that being too prepared burned you? Insane.

Given that football knowledge and his ability to breakdown plays on the fly, it’d seem like Sean McVay would be an ideal candidate for a TV gig at some point in his future. We’ve seen other head coaches who displayed a similar talent — namely John Madden and Jon Gruden — move from the sidelines and have a successful career in the broadcast booth before, and the current Rams head coach seems to be a great candidate to do the same. But at 34 years old, one would think that’s way down the road, not anytime soon.

However, that didn’t stop ESPN from reportedly trying to lure McVay to their Monday Night Football crew this upcoming season, with Andrew Marchand of the New York Post reporting that the Worldwide Leader reached out to try and tickle the head coach’s interest.

Let’s break a little Mailbag news with a big name ESPN spoke to for Monday nights that has not been reported. ESPN talked to Rams coach Sean McVay about being a “Monday Night Football” analyst, sources told The Post.

ESPN executives think McVay could be a standout in the booth, somewhat like Jon Gruden. McVay is just 34, has already been to a Super Bowl and is under contract, but a conversation was had.

It didn’t happen, but it was left at that if McVay wants to leave coaching ESPN would be interested in having him in the booth.

Every network seems to be looking for that next Tony Romo — AKA a guy who can predict plays before they’re going to happen — and Sean McVay has certainly proven he falls into that kind of category. But the guy is a boy genius who has the potential to become an all-time great at the head coaching position, and isn’t even 35 years old yet.

ESPN recently revealed its Monday Night Football crew for the upcoming season would be Steve Levy, Brian Griese and Louis Riddick, all of whom are great additions into the booth. But the network has also tried its damndest to persuade guys like Peyton Manning (and even Romo) into their primetime broadcast without success, so the news that they at least reached out to Sean McVay shouldn’t come as much of a surprise.

Who knows; maybe McVay and the Rams struggle in the next couple seasons, he gets canned, and, by 36 or 37, he’s open to discussing the potential of joining the MNF booth. That actually seems like a real possibility.