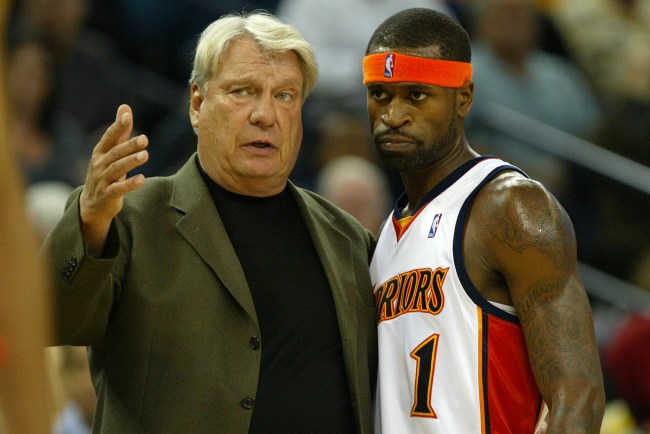 Former NBA player Stephen Jackson has always been a bit of a renegade. Whether it was playing a role in the “Malice in the Palace” in 2004 — when he received a 30-game suspension for going into the stands while a member of the Indiana Pacers — or suggesting some serious hot takes now that he’s a member of the media, Jackson doesn’t often hold back when it comes to showing his true self. Hey, that type of shit should be applauded considering so many people fake it all the time.

A major advocate when it comes to marijuana, Stephen Jackson isn’t shy when it comes to talking about how much pot he smokes. In fact, the podcast he hosts with former teammate Matt Barnes is appropriately called “All the Smoke,” and his popularity after his NBA career has, seemingly, been bigger than when he played. One reason why? The slow acceptance of cannabis and CBD in sports.

With Jackson among the many former or current athletes in support of marijuana — with Kevin Durant recently talking about his thoughts on the drug — it’s not surprising to hear about some of the wild stories Jax has when smoking himself. One of the crazier ones involves his time with the Golden State Warriors, which is when he first played with his now podcast host, Matt Barnes.

As the story goes, Jackson claims that then Warriors head coach Don Nelson knew about the extracurricular activities of some of his players, and that, straight up, Nelson just didn’t give a damn about them getting high; just as long as they were playing well. While talking to NBC Sports‘ Tom Haberstroh, here’s what the former NBA player had to say.

Jackson tells the story of a time in Utah when, after Warriors guard Baron Davis took the final drug test of the season, coach Nelson began high-fiving him along with his teammates, “like, yeah, y’all can smoke freely now! (Nelson) accepted it.”

“Me and Don Nelson stayed in the same building,” Jackson said. “I stayed on the 11th floor. He stayed on the roof. I had the whole building smelling like weed. He definitely knew. As long as we were playing well, he didn’t give a f*** what we were doing.”

[Jackson] didn’t like playing the least bit high. He’d smoke after games to balance out the adrenaline rush that pulsed through his veins. Some players drank alcohol to come down. He’d consume cannabis. In fact, he’d make sure a blunt was lit by the time he stepped into his car.

Considering Don Nelson’s admitted to being a huge stoner himself after a lifetime in the NBA, Stephen Jackson’s story seems pretty appropriate. It’s sort of like when your parents told you not to do something when you were younger, but, secretly, they were doing it themselves without you knowing.

Jackson’s story might come as a shock to some people, but it’s something we’ve heard about before from other pro athletes — like former NFL defensive lineman David Irving, who retired from the league so he could “smoke all the weed he wants.” There have been others, like Percy Harvin, who even admitted to being high for every game he ever played in the NFL.

As the narrative surrounding marijuana and its regular use among pro athletes keeps evolving, more and more stories will come out similar to the one Stephen Jackson tells above. Whether you think that’s a good or bad thing is up to you, but if the stuff’s helping these guys mellow out, focus and/or deal with the pressure of performing at a high level — and it’s not impacting them in their sport — who really cares if they’re regularly using.