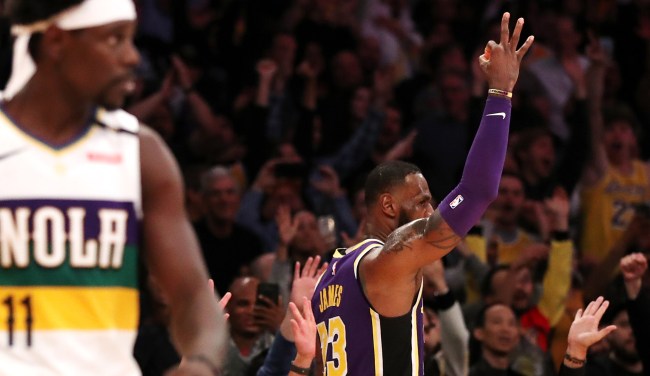 So far, the most entertaining storyline of the 2019 NBA season has to be the whole LeBron James, Anthony Davis, Lakers, Pelicans saga.

• 12/4/18: Rumors that Davis will be traded to the Lakers begin.
• 12/20: LeBron admits that he’d like the Lakers to trade for Davis.
• 12/21: GMs of small market teams complain to the NBA about James’ “tampering.”
• 12/22: James fires back at angry GMs and has dinner with Davis, further fanning the flames.
• 12/28: The NBA warns teams about tampering thanks to LeBron openly recruiting Davis.
• 1/28: Davis officially requests a trade, Pelicans’ trade demands to the Lakers are revealed.
• 1/28: Pelicans complain to the league that James and the Lakers “tampered” with Davis.
• 2/3: Negotiations continue with the Pelicans countering the Lakers’ offer.
• 2/5: Lakers pull out of trade talks due to the Pelicans “outrageous” demands.
• 2/7: Report claims the Pelicans were trolling the Lakers the whole time as revenge for tampering with Davis and to wreck the Lakers’ team chemistry.
• 2/15: Pelicans fire their GM Dell Demps after Davis leaves the arena in the middle of a game.
• 2/16: James and Davis send the internet into meltdown when the two meet at the All-Star Game.
• 2/21: It’s announced that Davis will appear on LeBron’s show The Shop.

And now, on February 28th, the day after the Lakers and Pelicans faced off in Los Angeles, Twitter is once again aflame with reactions to something related to LeBron James and Anthony Davis.

That’s because with under a minute to play in the game, with the Lakers leading 120-117, James got off a wild one-footed three and drained it, all but sealing the win for L.A. The reaction of Anthony Davis to the shot was almost more than the internet could handle.

Anthony Davis with the “why am I still here?” pic.twitter.com/g7yObjIvUy

Anthony Davis looking at LeBron like a full course meal after hitting that fade-away 3. pic.twitter.com/im8WMaYSTS

Come for the LeBron James three, stay for the Anthony Davis reaction. 😂 pic.twitter.com/TvpxMshWLD

Anthony Davis is face after LeBron made that three lmaoooo pic.twitter.com/WKpoFNTpo1

Anthony Davis face on this LeBron made 3 is priceless. Don’t worry AD you’ll be paired with LBJ soon 😉 pic.twitter.com/vlewsaTFu7

Look at that smirk on Anthony Davis face https://t.co/hMfXxTv49N

“That’s my boy. I’m going to be playing with him next year!” ~ Jeff Van Gundy with another dagger in Pelicans fans hearts.

Anthony Davis hit the first bucket of the game.

Scoreboard gave the points to the Lakers. pic.twitter.com/wgU8QpbnwE

Anthony Davis scores the first bucket and the Lakers are given 2 points pic.twitter.com/b3G00IDH5t