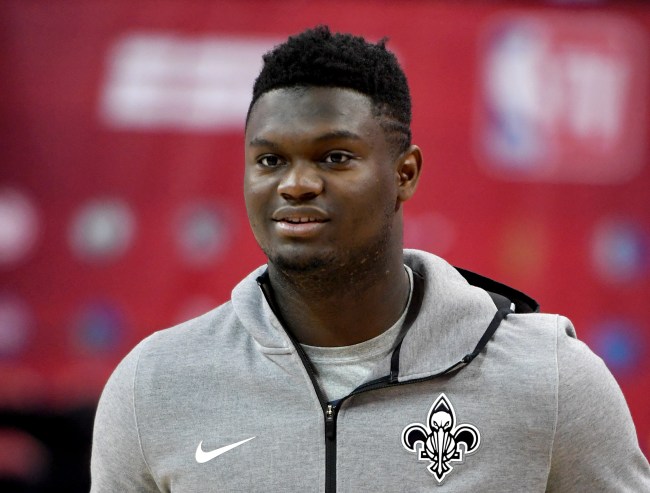 Zion Williamson is an absolute athletic freak, we all know that. Whether it’s put on display on the basketball court, where he dents balls, hits his head on the backboard or almost rips down hoops, or shown on the football field — where his old high school coach talked about how insanely talented the kid was — the top pick in this year’s NBA Draft can, seemingly, do it all better than normal people.

And while Zion isn’t looking for a new sport to dominate anytime soon, he did show up to the New Orleans Saints’ practice facility the other day to show up NFL players, which included future Hall of Famer Drew Brees.

Responding to a basketball-themed quarterback challenge, Zion Williamson showed off his football passing skills, where he causally aired out 50-plus yard bombs. Take a look at the videos below, with the second one showing the QB challenge between him and the Saints’ passers.

Has anyone been as athletic as Zion Williamson has? Maybe, but we have yet to see that person, because this dude isn’t human with what he can do in a variety of sports.

Naturally, after seeing Zion toss the football around, Saints head coach Sean Payton couldn’t help but salivate at the potential the kid would have in a helmet and pads, with Payton describing to Sirius/XM NFL Radio how he could envision Williamson lining up for just 10 snaps a game at defensive end to rack up sacks.

Actually, Payton said if Williamson were willing to join the Saints, “there’d be five position coaches with their hands up right now, starting with the defensive line coach and the tight end coach.”

“It’s not like he requires a lot of projection,” said Payton, who said the Saints have scouted many former basketball players over the years. “Like, we’ve looked at a lot of body types, but I feel like that’s an easy projection.”

That’s some high praise from a Super Bowl-winning head coach, but, hey, if anyone’s worthy of it, it’s Zion Williamson.

Of course, this isn’t the first time Zion’s name has been floated around by a football coach, with Clemson’s Dabo Swinney saying a few months ago how he’d love the chance to line up the hefty baller at any position he’d want to play, which seems like it’d just be unfair against any defender who’d dare try to matchup with him. Here’s what Swinney said back in January when he joined Mike Krzyzewski’s radio show.

“I’d put [Williamson] at tight end or wideout or [defensive] end or wherever he wanted to play,” said Swinney, per a clip released by Duke of the show that will air on ESPNU Radio at 6 p.m. ET Thursday. “We might even put him at quarterback.”

Swinney responded: “Put in the Wildcat, no doubt.”

While Zion Williamson is that kid in gym class who’s good at every sport, none of us should expect him to switch sports anytime soon, ’cause he’s pretty damn great at this whole basketball thing.