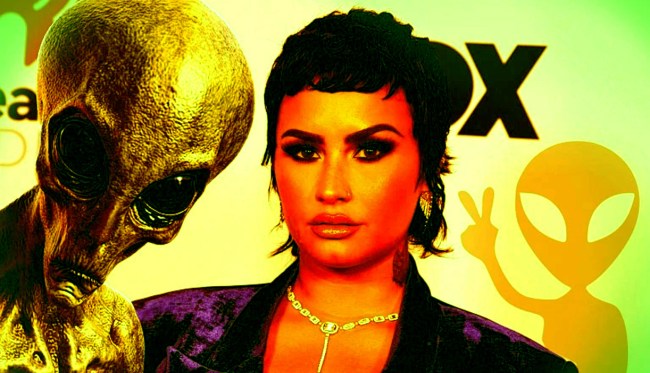 Pop star Demi Lovato, who most recently made news for proclaiming that the word “alien” is a derogatory term for extraterrestrials and we should stop using it (something Neil deGrasse Tyson completely shot down), now says she would date one.

During her recent appearance on the Facebook Watch series Face to Face With Becky G, Lovato made her feelings very clear about whether or not she’d ever date an alien, errr, extraterrestrial.

“If there was an ET that hit every box of criteria that would be like the most ideal partner, like, would you date an ET?” Ms. G asked Lovato.

WAIT A MINUTE. Isn’t calling them aliens derogatory? Is this some sort of Jedi mind trick Lovato is trying to pull off on us all?

Related: Pilot Who Witnessed UFOs Over Florida Says What He Observed Is Not Aeronautically Possible

The host of the new show Unidentified With Demi Lovato also recently scored a new gig as a paid “ambassador” for a streaming video site called Gaia. (That would be in addition to also launching her own sex toy “to take the stigma away from pleasure, and to take your sexual relationship to the next level.”)

“Thrilled to be a @wearegaia ambassador. Understanding the world around us (the known and the unknown) is so exciting to me!” Lovato recently told her 118 million followers on Instagram.

What that means is that there is now a Demi Lovato-themed Gaia page on the site and anyone who visits it receives a free episode of a Gaia show about an “ancient space program.” And you don’t even have to pay the $11.99 monthly Gaia membership to watch it!

While the claims made in the videos produced by Gaia can seem laughable, the site, which claims to have more than 750,000 members, has become a clearinghouse pushing conspiracy theories into the New Age movement. Gaia’s videos are slickly produced to look like genuine documentaries, with some featuring prominent figures in the anti-vaccine movement. The site has also been called a “hub for QAnon,” with QAnon promoters flocking to the platform after facing crackdowns from other websites.

Gaia’s own corporate culture is awash in conspiracy theories, according to a February report in Business Insider. Employees discussed QAnon and InfoWars, according to the report. Confusingly, employees were told that materials promoting a documentary about a benevolent alien species called “Blue Avians” required approval from the Blue Avians, as if they were real, Business Insider reported. Gaia denied that allegation.

Sounds like a match made in Heaven, or some galaxy far, far away.

In a press release announcing the new partnership with Lovato, Gaia wrote, “Lovato’s fascination with Gaia was sparked by their introduction to one of its show hosts Dr. Steven Greer, founder of the Center for the Study of Extraterrestrial Intelligence (CSETI). After several profound experiences practicing Dr. Greer’s meditation protocols intended to make contact with extraterrestrials, Lovato became enamored with the study of consciousness. Continuing down their rabbit hole, Lovato quickly fell in love with Gaia original series ‘Ancient Civilizations’ and ‘Deep Space.'”

Oh, we know all about Dr. Steven Greer. That’s the guy with who Demi Lovato has been communicating with aliens.

“I am excited to be one of Gaia’s first celebrity ambassadors and honored to join a platform I have been a fan of for some time,” said Lovato about the deal. “Understanding the world around us, both known and unknown, and diving deeper into areas that expand our consciousness is exciting to me and I am honored to be able to be a part of a community of people who want to do the same.”

So, if you want to learn more about “the nature of reality” and how the world is really run by lizard people then Demi Lovato has definitely got something she wants you to see.