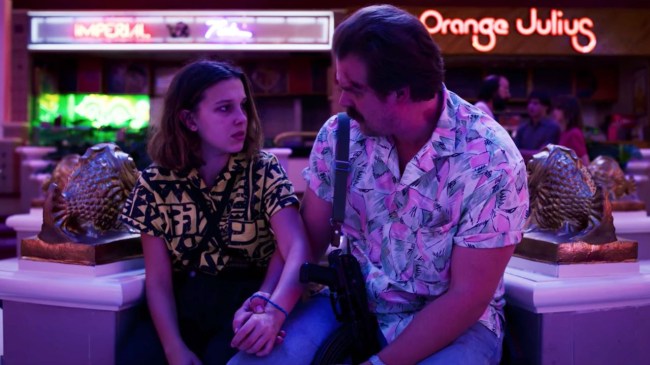 Despite the fact that Stranger Things constantly pays homage to films that were made long before the invention of the Easter Egg, the show itself in consistently chock full of them, especially in its most recent season.

What’s great about Easter Eggs is that it can provide content for the fans long after the show has been released. Stranger Things 3 was released almost two weeks ago and yet fans are still uncovering both major and minor hints and nods throughout the show.

Take this Reddit user, for example, who spotted a heartbreaking detail that further bounds Eleven and Hopper’s father-daughter relationship, noticing that in Stranger Things 3, Eleven can be seen wearing Hopper’s late daughter’s hair tie that the big man himself was wearing in season 1.

The hair tie, which belonged to Hopper’s late daughter Sara, has quietly been a fixture on Stranger Things ever since its first season, as it first appears on Hopper’s wrist before making it to Eleven’s at some point in Stranger Things 2.

Despite never being directly discussed, the hair tie remains present in the Stranger Things 3 finale, as it can be seen on Eleven’s wrist as she struggles to reach the stuffed bear that’s on a shelf just out of her (now powerless) reach.

Just when I got done crying about Hopper, the internet goes ahead and drops this bomb on me. Hopefully, though, this is yet another sign that the world of Stranger Things isn’t done with Chief Hopper just yet.