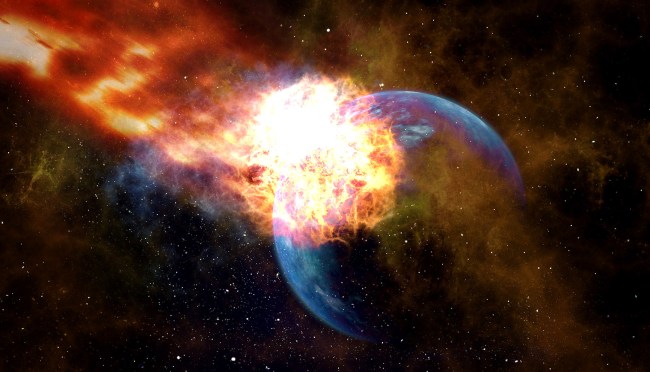 “Here we go again…” I can hear you saying. Yes, here we go again… BUT… this mother of an asteroid NASA is currently tracking, Asteroid 52768 (1998 OR2), makes the doomsday space rock nicknamed “The Colossal God of Chaos” asteroid look like a pebble.

It measures, according to NASA, between 0.9 miles and 2.54 miles in diameter. The “Colossal God of Chaos” asteroid, 99942 Apophis, is somewhere in the vicinity of 2,132 feet in diameter, or 0.4 miles wide, and if it hit Earth on one of the 10 dates NASA has designated as having a “calculable risk of deadly impact” it would end humanity as we know it.

So, there is definitely reason for NASA to be paying close attention to Asteroid 1998 OR2.

Below are orbit diagrams showing the trajectory of Asteroid 52768 (1998 OR2) and the path it will be taking which will see it, hopefully, pass by Earth without consequence next month.

The space rock was spotted flying around the Sun in 1987 and NASA confirmed it’s orbit on June 30, 1987. Astronomers have classed the rock as a “potentially hazardous” NEO or near-Earth object.

But just how close does NASA expect the asteroid to come to Earth next month?

In other words, the space rock is expected to miss us by about 16.36 times the distance from Earth to the Moon.

That’s assuming it doesn’t change its trajectory between now and then, which has been known to happen.

For comparison’s sake, because we’re talking about large distances (it is space after all), the Moon is 238,900 miles away from Earth, and most satellites orbit our planet at around 22,000 miles.

So when you look at it that way, it’s really not going to be passing by Earth that far away at all.

Previous asteroid scares…
• Head for the bunker, NASA is tracking a giant asteroid on earth ‘approach’
• Heads up, a pack of asteroids is hurtling towards Earth at speeds of up to 27,500 MPH this weekend
• Russia plans to build a base on the moon to track asteroids on a collision course with the Earth
• Space agency expert predicts ‘serious impact’ from an apocalyptic asteroid: we ‘need to do something about it’
• Apocalyptic will hit in the next decade and space agencies are covering it up, says biblical scholar
• NASA reveals 10 dates when Apophis, the ‘Colossal God of Chaos’ asteroid, could smash into Earth
• NASA says city-killer asteroid the size of The Great Pyramid of Giza will have a chance of smashing into Earth in 2022
• A potentially hazardous’ 3,000-foot long asteroid is flying by Earth: here’s how to watch it
• NASA has spotted a giant Apollo asteroid, the most dangerous class of space rock, on a concerning Earth-orbit
• New asteroid detected, named the fourth most dangerous to hitting Earth according to the European Space Agency
• Space agencies are going to crash a spacecraft into an asteroid at over 14,000 mph to see what happens
• Experts warn ‘100 percent’ chance of asteroid colliding with Earth and action needed to prevent mass extinction