Heads Up, A Pack Of Asteroids Is Hurtling Towards Earth At Speeds Of Up To 27,500 MPH This Weekend 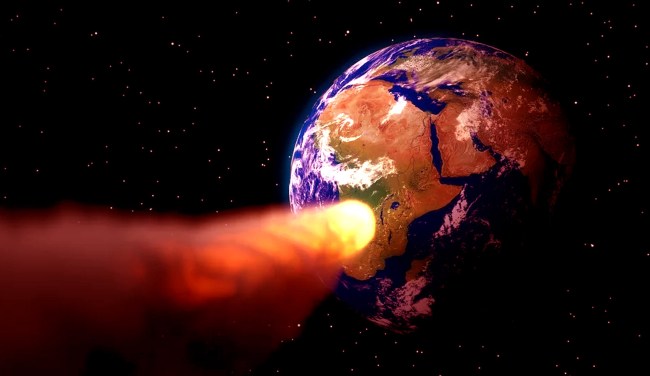 Might want to find a heavily-reinforced bunker somewhere to hang out for the next few days because according to NASA’s asteroid tracking system things could get a little hairy this weekend.

For you see, there’s not one, but four asteroids on their tracker headed our way at speeds of up to 27,500 mph.

Daily Express confirms that the first space rock traveling towards Earth that we have to be concerned with, Asteroid 2010 AE30, will have a “close approach” trajectory with our planet sometime around 7 pm ET on Thursday, January 16. 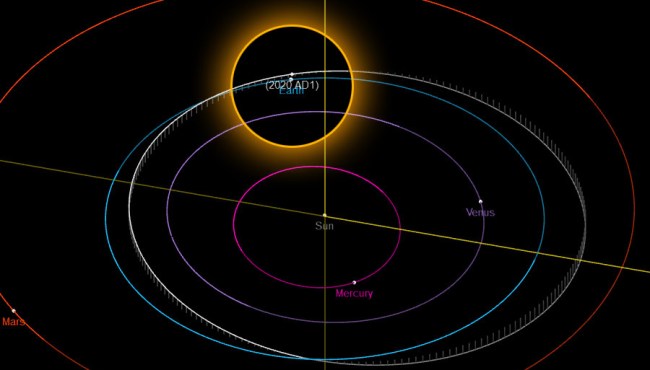 The four space rocks have been classified by NASA’s tracking systems as NEOs or Near-Earth Objects. NEOs are all comets and asteroids that orbit the Sun from a distance of no more than 1.3 astronomical units.

The space rocks frequently visit Earth’s corner of space and sometimes cross paths with our home planet to disastrous effect.

Frankly, it’s surprising that we haven’t already gotten belted by one of these rocks after bouncing off all the space junk we’ve left out there littering the stratosphere. (That’s a thing that can happen, right?)

After all, the European Space Agency (ESA) currently has a list of almost 1,000 asteroids and comets on what they call their “risk list.”

Should it collide with our planet the result would probably look a little something like this.

The likelihood of any of the four asteroids actually making contact with Earth are supposedly extremely low, but as every good scout knows, always “be prepared.”

Previously…
• Russia plans to build a base on the moon to track asteroids on a collision course with the Earth
• Space agency expert predicts ‘serious impact’ from an apocalyptic asteroid: we ‘need to do something about it’
• Apocalyptic will hit in the next decade and space agencies are covering it up, says biblical scholar
• NASA reveals 10 dates when Apophis, the ‘Colossal God of Chaos’ asteroid, could smash into Earth
• NASA says city-killer asteroid the size of The Great Pyramid of Giza will have a chance of smashing into Earth in 2022
• A potentially hazardous’ 3,000-foot long asteroid is flying by Earth: here’s how to watch it
• NASA has spotted a giant Apollo asteroid, the most dangerous class of space rock, on a concerning Earth-orbit
• New asteroid detected, named the fourth most dangerous to hitting Earth according to the European Space Agency
• Space agencies are going to crash a spacecraft into an asteroid at over 14,000 mph to see what happens
• Experts warn ‘100 percent’ chance of asteroid colliding with Earth and action needed to prevent mass extinction