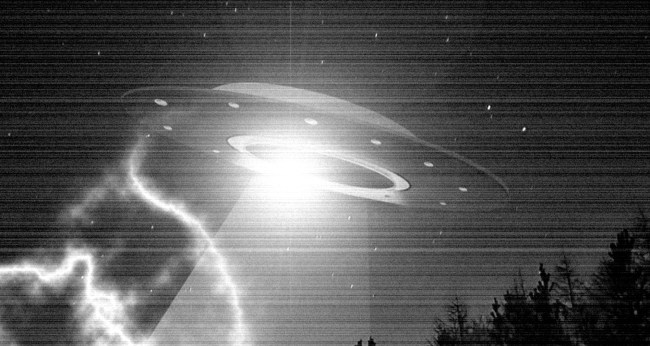 It’s pretty safe to say that at this point in history that the observation and filming of UFOs has become what I would call a common event.

With all of the discoveries and investigations that have taken place over the past several years, combined with aliens’ almost complete disregard for their previous inclination to cloak or hide their spacecrafts, the secret is out.

What isn’t a common event, however, at least according to one expert, Scott Waring, is the capturing on video of a white ring-shaped UFO.

The eyewitness to the ring UFO explained what she saw in the sky above Irvine on Dec. 9, 2020. 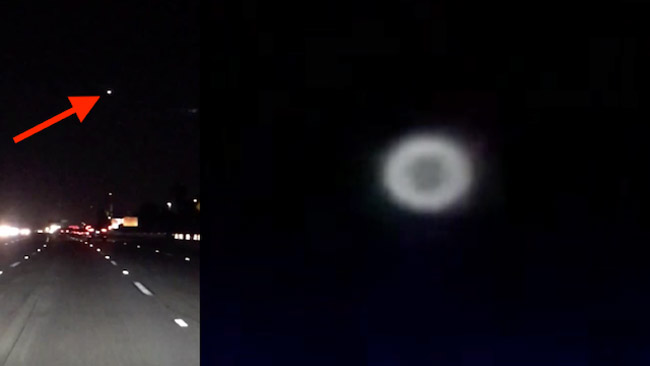 “I first spotted it when we are halfway back from Long Beach entering Irvine over the 405 there was three I initially spotted and the total went up to nine.

“My daughter who is four years old, my boyfriend who is in the passenger seat and I all saw the crafts and watched them move very erratically and descend closer to us.

“My boyfriend became very afraid at this point as we could all see the lights in a circular pattern around the circumference of the crafts and the one that descended very close to us in particular but they all seem to descend closer in unison heading inland and south.

“My boyfriend was recording this on his phone and we both saw a orb pass right through Our eyeline as we are watching the crafts.

“They followed us all the way until we got home and then there was only one left and it too disappeared.

“It was very strange almost like they were trying to communicate with us.

“This isn’t my first foray into UFO spotting‘s but it was my boyfriend and my daughters first actual sighting although they’ve been with me when I’ve seen them.”

Waring, one of the most prolific UFO and alien experts in the world, expressed his feelings about the unique UFO sighting on his website.

Listen to the eyewitnesses surprise as they soon resize the glowing light ahead of them is a glowing ring UFO.

You can really hear the surprise in their voices and I have to admit…I was a bit excited too because white rings are a rare event.

Very cool, and seen over the freeway in Irvine…there should be more reports coming in over the next few days.

100% proof that UFO are buzzing over Irvine.

Check out the sighting for youself in the video below.

• Leaked secret Pentagon task force photo shows UFO military officials admitted could be ‘alien’
• Astronomers track source of mysterious radio signals to a location within our galaxy
• NASA announces water has been discovered on the moon, bringing us one step closer to proof of alien existence
• Former Senate Majority Leader Harry Reid reveals ‘UFOs interfered with U.S. nuclear program’ in new documentary
• Three lakes found beneath surface of Mars could be home to alien life on the red planet
• Japanese defense minister issues official protocols to military for UFO encounters; do they know something?
• Signs of life found on Venus? Alien bio-signature discovered by astronomers on Earth’s ‘twin’
• New study says microscopic aliens may have been visiting Earth, and multiplying, for centuries
• New study suggests interstellar space rock Oumuamua ‘could have been sent by aliens’
• Landmark new research claims evidence of alien life may exist under ancient ice sheets on Mars
• Ex-Pentagon UFO program astrophysicist admits examining ‘vehicles not made on this earth’