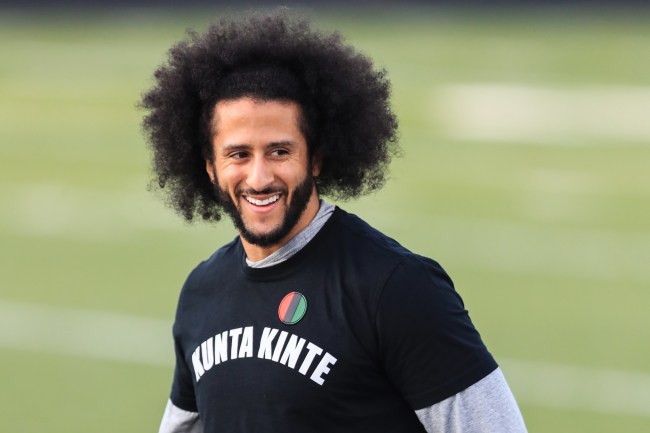 The name Colin Kaepernick is so hot right now, as the former San Francisco 49ers quarterback is (rightfully) being talked about as an option for NFL teams now that the Black Lives Matter movement is (rightfully and thankfully) being taken seriously at protests around the country. Remember, it was Kaepernick who silently protested by taking a knee during the national anthem prior to NFL games beginning in 2016 to draw attention to police brutality — something that got him all but blackballed by the league, even though he’s more than deserving of a fair shot at a roster spot.

Fast-forward to present times, we’ve already seen President Donald Trump proclaim he supports the idea of Colin Kaepernick getting another chance in the NFL, as well as the league’s commissioner, Roger Goodell, not only encouraging such a move, but also releasing a statement apologizing to players that the NFL didn’t listen to silent protests like Kaepernick’s — although Goodell didn’t shout-out the free agent signal-caller by name.

With all the talk about Colin Kaepernick possibly returning to the NFL — something that is reportedly generating traction — a serious question remains: Should he take the opportunity if one presents itself?

This is interesting: #Seahawks HC Pete Carroll told reporters that a team called him today asking about Colin Kaepernick. He said today was the first time a team has called regarding Kaepernick since Seattle worked him out in 2017. "Someone is interested."

The simple answer is yes, because it’s a fight that Kaepernick has been putting himself through hell to earn. It would solidify his place in history as the athlete who overcame prejudice for speaking out about what he believes in on the most public of forums, while also casting blame on 32 NFL owners for not giving him a fair opportunity until they were forced to. In essence, it would have proven that Colin Kaepernick beat the NFL.

But, if there’s anything we’ve learned through the past four years when it comes to Kaepernick and the NFL, nothing is ever that simple.

Here’s a question the quarterback might want to ask himself should an NFL team come calling: Do I really want (or need) to go back to the NFL to prove my worth?

Now this is where things get interesting.

It’s one thing for the league and NFL owners to speak out in support of Colin Kaepernick, but it’s another thing for them to actually take action. Would signing the quarterback strictly be a PR stunt? Will the attention that signing him would bring be good or bad? And what about kneeling during the national anthem, is the quarterback still planning on doing so despite some owners’ not truly supporting it?

If the answer to the first question is yes, then the other two questions are irrelevant — and that’s why Kaepernick has to ask himself if it’s worth signing with an NFL team strictly for his own personal vendetta against the league. He’s bigger than that. He has a powerful voice that’s much stronger than that. In fact, he said so himself during a 2018 Nike campaign that pledged one simple action: sacrifice.

“Believe in something. Even if it means sacrificing everything. Just do it.”

If this is truly a mantra Colin Kaepernick believes in, he should shun the NFL. He should tell every single owner or general manager who might be interested that he’s over it. He should refuse to sign a sympathy contract with a team simply because an opportunity presents itself. Why? Because he wouldn’t be sacrificing it all.

For instance, just look at the recent chatter happening around the NBA right now, and how there’s talk that some players — specifically Kyrie Irving — are reluctant to resume the season because it would distract from the Black Lives Matter movement. Think about the good press and acknowledgement an NFL team would get by signing Colin Kaepernick. Would he really want to risk his physical and mental health playing for another billionaire owner just to make the franchise more money, all while getting away from real change within communities?

Wouldn’t Kaepernick be better served telling an NFL team “thanks, but no thanks” if he’s offered a contract, and instead work with the franchise (and league) for an opportunity to set up a social justice coalition that he could lead? Being employed by the same league that had kicked him to the curb would be the ultimate way to prove he accomplished what he set out to do.

The quarterback is an athlete, and wants to play. He has the right to play. He’s more than capable of playing. But he shouldn’t; because he has a bigger purpose than just throwing around a football for the chance to revive his NFL career. In the words of LeBron James, this is Kaepernick’s moment to be “more than an athlete.”

The movement that Kaepernick so peacefully began protesting in 2016 has now reached the national level. It took four years, a reported multimillion dollar collusion settlement between the NFL and the quarterback, and it took countless lives of black people in America at the hands of police brutality. Had people acted back then, and not just listened or angrily reacted, at what the quarterback was really kneeling for, we would already be ahead of the current issue at hand.

Colin Kaepernick’s risked a lot since the NFL blackballed him, but he’s also earned a lot as well. He has every right to make his own decision and play in the league again — should the opportunity present itself — and would have a bigger audience given the weekly exposure by doing so. And if he decided to give up his full-time focus of helping impact the lives of millions and try to change prejudice against black people in our country for any money from an NFL team, he may be going back on what his entire platform has been used to bring attention to: sacrifice.