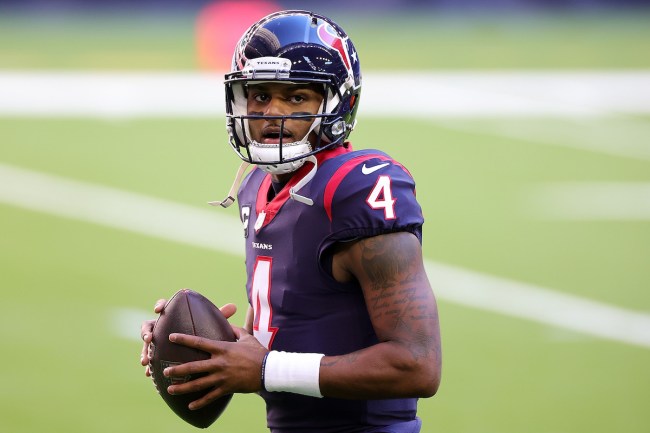 The Deshaun Watson trade rumors continue to swirl, with the Houston Texans quarterback sticking to his guns to try and force his way out of town. With the NFL offseason in full swing — and the Texans already making noise with the recent release of franchise stalwart J.J. Watt — it seems like when, not if, the franchise will stop trying to play hardball and finally trade Watson.

Of course, as of right now, that’s not what the team leadership is doing. Recent reports claimed the team has no interest in shipping Deshaun Watson out of town — nor should they be in any rush whatsoever — but there’s a clear disconnect between the front office and the superstar signal-caller. Can it be repaired? Who knows? But it doesn’t sound as if Watson wants anything to do with the Texans anymore.

Considering many in the sports world think Watson’s as good as gone at some point this NFL offseason, there are constant rumors about which teams could swoop in and acquire him. Naturally, because we’re dealing with a superstar quarterback, pretty much ever franchise has been linked to the Pro Bowler. But which organization actually has the need and assets to pull off such a blockbuster deal — and appeals to the player, who has a no-trade clause? Well, according to a new report, we now have an idea, with the New York Jets, Miami Dolphins and Carolina Panthers believed to be the only teams Watson would approve a trade to.

It's been confirmed by sources that Deshaun Watson would approve trades to the Jets, Dolphins, and Panthers.

Now, look, there’s no telling what is and isn’t true when talking about these Deshaun Watson trade rumors, but those three teams are generally the ones often mentioned most about doing a deal with the Texans. Problem is, it takes two to tango, and, right now, Houston is standing firm in its position to hold onto the franchise superstar. Maybe that changes over time, but that’s left to be seen.

With the Jets holding the No. 2 overall pick in the 2021 NFL Draft, Miami sitting at No. 3, and Carolina having the No. 8 pick — as well as the potential of trading fellow superstar Christian McCaffrey for Watson — there are tons of potentially tasty scenarios for the Texans. If the team does trade the quarterback, they could immediately draft his replacement, as well as expedite the rebuilding process with additional assets.

As the Deshaun Watson trade rumors drag on, it’s clear that the situation continues to get worse with each passing day. Whether it’s the quarterback’s teammates supporting his trade request, former Texans’ greats encouraging him to stand his ground, or the general perception that the entire organization is in free fall, this needs to end sooner rather than later. If and when it does, it will be the singular move that defines the entire NFL offseason.