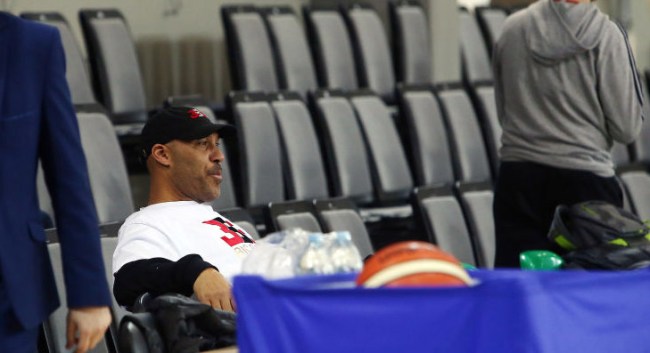 Remember way back in January and February when the Ball family circus took its talents to Lithuania? Yeah, it does seem like it happened years ago.

The whole spectacle of LaVar, LaMelo and LiAngelo Ball basically taking over the BC Vytautas basketball team was pretty much the disaster everyone expected it to be.

They arrived to a completely overblown airport welcome, LaVar eventually took over as an assistant coach, LaMelo and LiAngelo threw up shots like maniacs and played zero defense, LaVar publicly berated the team’s head coach, and then he pulled his sons off the team just as they were trying to avoid relegation.

One of the people that went along for the ride in Lithuania was then-ESPN writer Jeff Goodman. His relationship with the Ball family, much like Lithuania’s, also did not end well.

During a recent episode of The Ringer’s “One Shining Podcast,” Goodman detailed how things went sour when Goodman reported on how LaVar trashed Lakers head coach Luke Walton.

Check out the transcript of Goodman’s story below, courtesy LonzoWire.

“That was a tough one, too, just because again, like, LaVar told me those quotes on the record. I mean, I could play you the audio now. I’ll play it for you guys. And I actually gave him an opportunity. Like, that’s the craziest part. We sat down that morning. So, in Lithuania, we had like a backroom at the hotel. It’s like a spa. Like a four-star spa that we’re staying at in Lithuania in the middle of (expletive) nowhere. Right? And they gave us like a backroom together. So, this was the day when they had announced they were going to put together this Big Baller bull(expletive) series. That series that could play them like 38 minutes and get all their numbers, and LaVar would pay for it, basically.

“So, we’re back there talking about that. Within conversation, I just asked him about Lonzo, how he’s playing and he went off on Luke Walton. Like he just goes off. And I’m like, I said to him, ‘Are you sure you want to do this?’ He’s like ‘You know me. I don’t care.’ Alright, fine man.

“I don’t think I’ve ever told this whole story … So, I wait a day on that story. The first story I wrote was the Big Baller bull(expletive) series, and I didn’t want to do two stories in one day. I wanted to save them, and I knew nobody else was going to get the comments on Luke Walton because I was the only knucklehead in Lithuania.

“So, I wait a day … I think I just made the executive decision to wait because nobody else was going to get it anyway. And again, I wanted the story for that day and a story for the next day. So, I want and the only people at the table then were Harrison Gaines (his agent) and LaVar’s brother. His business guy, Alan (Foster), I don’t know if you guys know this guy. Alan wasn’t there yet. … So, I wait, I send the story in the next morning. I go and I was setting up an interview with LaVar and the boys in their rooms. Sit-downs in their rooms. I ran the story. Alan comes in, and Alan is his business guy. Like, he does everything for him. He comes in and he says ‘LaVar, what the hell are you doing? Why are you saying that stuff? Magic just called me and he’s pissed off. Why would you do that?’ And LaVar looked at him and (Alan) says ‘You have to get the boys playing on the Lakers. Why would you do that?’

“Crushing Luke Walton, the coach, would hurt any chance, which there’s zero for LiAngelo. LaMelo is talented. Listen, I don’t know if you guys have seen him play. He is talented. He’s just the most undisciplined player. Like, the only worse defensive player that I have ever seen is Jimmer Fredette.

“He just didn’t think about it. He didn’t think like, ‘Yeah, Magic might’ve told me to hey, step back.’ So, yeah, that whole thing happened.”

LaVar later tried to spin the story to his favor in an episode of Ball in the Family.

Hard to believe LaVar Ball could be capable of stretching the truth to suit his needs, huh?