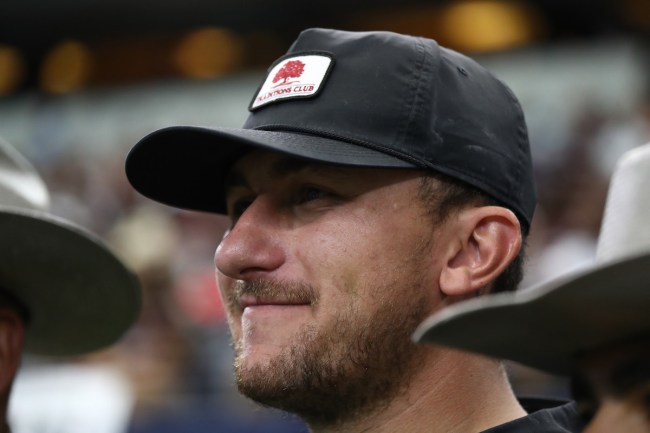 Johnny Manziel and I have a love-hate relationship. I loved the dude when he was cocky AF playing in college and living the life of an A-list celebrity because playing football was, you know, just something he did as an amateur athlete. But I hate that, once my Cleveland Browns drafted him in the first round of the 2014 NFL Draft to be a professional athlete, he, you know, continued to party like a frat star and, eventually, got pushed out of the NFL.

Since then, Johnny Football has done… well, next to nothing, really. Sure, he had short stints in some B-level football leagues, but, for the most part, the former Heisman Trophy winner has just counted his cash and had fun. At 28 years old, he’s living the retired life of a 60-something in Boca Raton, playing golf, fishing and hanging out with friends — only it’s a bit rowdier. Hey, kudos to him for living it up, as his “friend” Drake once famously said, “YOLO!”

But all that free time has gotten Manziel down, which is why he’s decided to play in a new concept called the Fan Controlled Football (FCF) League, which gives fans the chance to call plays, take part in personnel decisions and have the experience of being part of the entire operational experience. It’s sort of like Madden… but in real life.

So what led Johnny Manziel to playing in the FCF? Boredom. Take a look at what the new quarterback of a team called the Zappers had to say about his reasons for joining the FCF.

“A big reason I’m here is I’m a little bored,” Manziel said. “I’ve been playing golf five days a week, hanging with my boys and playing cards and running around Scottsdale having a blast with a great group of friends that I’ve acquired out there. But I don’t have much of a schedule unless I create one, and I haven’t really created one.

“This isn’t me trying to be a comeback, redemption-type of tour for me to go back and play football anymore moving forward. After I play here, I probably won’t pick up a football again for another year. Two. Or maybe even longer than that. This is just an opportunity that got presented to me to get around a bunch of good guys who I feel like we’ll make great business connections with and I’ll have a lot of fun while I’m doing it.”

Yep, while most 28-year-old’s are just trying to save cash for a condo or a kid or investing in something, Johnny Manziel’s out here talking about how bored he is. Clearly the dude has always lived in an alternate reality than the rest of his peers — which isn’t necessarily a good thing.

But what if his time in the FCF leads to a newfound love of football and an NFL team comes calling, would he consider returning to the league? Doesn’t sound like it, as Manziel said he’s focusing on being good at something else outside of football.

“I’ve been good as a football player in the past. I want to be good at something else in life, and I’ve tried to be patient and not force things like I have in the past and let life just come to me. And I’m a believer in something will pop up in my life that I know I’m going to love the way that I loved football at one point in time.

“For a time I didn’t like waking up and going and playing football anymore. I didn’t like the grind and going to work doing the whole thing. I fell out of love with it. So I think there’s going to be something that comes into my life moving forward. I don’t know exactly what it looks like or what it is, but in due time it’ll pop up and I’ll have that lightbulb moment again.”

The fact that Johnny Manziel just never wanted to put the work into being a pro athlete is exactly why he flopped in the NFL. He lost that passion for the game when it required more than just showing up on game day — which is sad, because the dude had the ability to completely ball out. Now that he’s in the FCF, where things are a little looser and expectations aren’t as high, it seems like he’ll fit right in with the laid back culture. Still, it’s hard not to wonder “what if…?” when thinking about what he could’ve been had he actually cared while he was in the NFL.