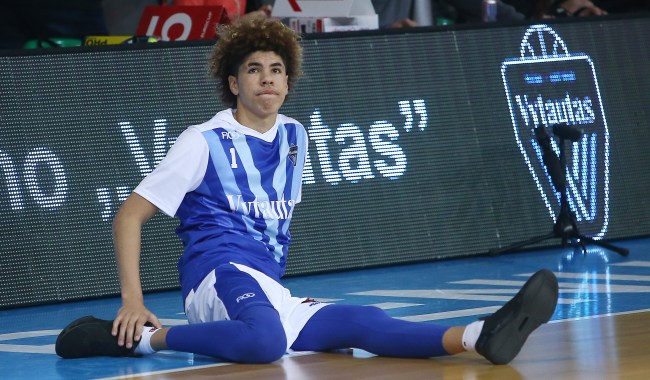 Earlier this week’ LaMelo Ball’s high school basketball team at Spire Academy was involved in a knock-down, drag-out, bench-clearing brawl with their opponent Springdale Prep. About the only thing really surprising about the wild melee is that it somehow didn’t happen sooner in the season.

As you may recall, LaMelo Ball got a LeBron-like billboard welcoming him to Ohio when he announced he was going back to school after playing in Lithuania.

Then there is the fact that Big Baller Brand is charging people a stupid amount of money just to film LaMelo during games.

Oh, and there was also the time a high school basketball team canceled its game against Ball’s school because he played professionally last year.

So yeah, how has a brawl not broken out in one of LaMelo’s games before this week?

Ball, for his part, showed no real interest in getting involved when the fight broke out. Way to have your teammates’ backs there, champ.

LaMelo’s team is sitting at 16-2 on the season and on a recent episode of Ball in the Family on Facebook, said he’d already been in contact with both Kansas and USC. (We already know he won’t be following in his older brothers’ footsteps by attending UCLA.)

LaMelo Ball says on Facebook's 'Ball In The Family' that he plans on playing college basketball and has talked to USC & Kansas 👀 pic.twitter.com/MZI0RJG34b

I’m still not clear on how someone who played professional basketball is eligible to participate in college basketball, but if there is a way I have no doubt that, hook or crook, LaMelo’s LaVar Ball will find it.