Michael Irvin Buries Cowboys For Possibly Being The Worst Team In The NFL, Forgets The Jets And Giants Exist 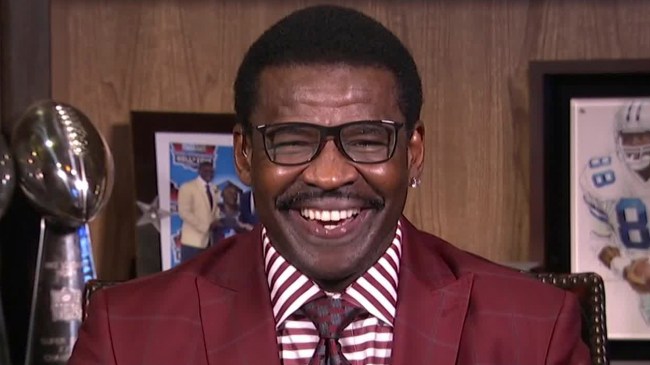 As a Hall of Famer and one of the most polarizing players in the history of the Dallas Cowboys, Michael Irvin knows what it means for a player to wear that iconic star on the side of his football helmet. He knows that it symbolizes pride. He knows that it represents a rich history. He knows that it should mean more than playing for any other NFL team. Unfortunately, none of that seems apparent in the current Cowboys’ locker room, because the team is a mess and is spiraling out of control.

Currently sitting at 2-5 with little hope to dig themselves out of a deep hole of dysfunction — even in a putrid NFC East — the Cowboys seem completely lost. They’re without their franchise quarterback Dak Prescott. Some players are already turning against first-year head coach Mike McCarthy and his staff. Owner Jerry Jones seems on edge given his team’s awful play. And all of this isn’t going unnoticed by franchise icons like Michael Irvin, who spoke up about how bad things really are in Big D.

During an interview with 95.7 The Game this week, Irvin didn’t mince words when talking about the shortcomings of the Cowboys, blatantly saying he things the team could possibly be the worst in the NFL. That’s saying something when you consider the Jets and the Giants are still pro football teams, with the New York franchises having a combined 1-13 record, and experiencing plenty of incompetence from the front office down to the coaching staff and players.

Still, when Irvin watches the Cowboys, he sees that team, arguably, being the worst in the league right now. Take a look at what the Hall of Famer had to say about his former franchise.

“I believe the Cowboys right now may be the worst team in the National Football League.”

“I believe the Cowboys right now may be the worst team in the National Football League,” Irvin said on San Francisco’s 95.7 The Game. “How can anybody pick the Cowboys at any time when you see what’s happening, especially what’s going on with that defense. I don’t even know how to explain this.”

“I know the Jets haven’t won a game. Would you take the Cowboys over the Jets right now?” Irvin said. “The difference is, I know the Jets look bad. But the Jets were expected to look bad. The Cowboys had people really thinking, including myself, that they were ready to be Super Bowl-bound, and they’ve been a Super bust.”

“This is just an all-time low for my Cowboys,” Irvin said. “It hurts.”

There’s so much to unravel there from Michael Irvin — who sounds like a pissed off dad who’s ashamed of his kid — but can anybody blame him? The Cowboys were thought of as possible Super Bowl contenders heading into this NFL season. Sure, Prescott’s injury threw them off course, but even before then, the defense was historically pathetic. Add in the lack of leadership in the locker room and all the reports floating around in the media, and it’s easy to see why Irvin’s so upset.

The former wideout also pointed out what Dallas did in the draft, even comparing the addition of first-round pick CeeDee Lamb to the Warriors adding Kevin Durant years ago. That’s definitely, uh, something.

“What the Cowboys did in the 2020 NFL draft, by adding CeeDee Lamb to the No. 1 offense in the National Football League — what Will McClay did, what Jerry Jones those guys, what Mike McCarthy did by adding this guy CeeDee Lamb, is akin, or almost tantamount to Kevin Durant being added to a 73-win Warriors team.”

It’s easy to point to the Jets or Giants and identify either as the worst team in the NFL, but Michael Irvin isn’t so convinced. Neither of those teams were expected to win; the Cowboys were. And when it gets to the point where fans watching the team expect the worst to happen, that’s when you know rock bottom has occurred. It kind of seems like that’s where Dallas is currently operating from.