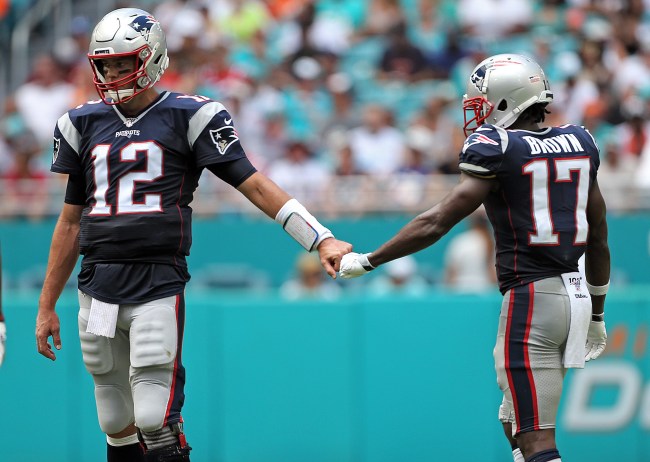 Tom Brady’s looming free agency has already been quite the saga to this point, with rumors swirling about where the current New England Patriots quarterback may or may not end up. From reports that he’ll be headed to the Los Angeles Chargers, to sightings of him in Las Vegas with the Raiders owner, to the Internet trying to decipher what Brady may have said in a now viral video alongside Julian Edelman at a college hoops game, nobody knows what the future holds for the GOAT.

While the rumors have bene difficult to keep up with, one of the latest has nothing to necessarily do with where Brady may play next, but with whom he may play with — and it’s a former Patriots teammate who lasted just 12 days with the organization. That person? Antonio Brown, the embattled wideout who has made headlines for the past year for all the wrong reasons.

According to a recent ESPN article written by Dan Graziano and Jeremy Fowler, both Tom Brady and Antonio Brown have, allegedly, been in “constant contact” with one another, hoping to team up somewhere as the NFL offseason approaches. Here’s what the report indicated.

Ready for a wild audible? Two people close to Antonio Brown — yes, that Antonio Brown — told us Brady keeps in consistent contact with Brown and has told Brown he wants to play with him wherever Brady goes next.

According to one of Brown’s attorneys, Brady has told Brown to keep mentally and physically strong so the two can reunite on the field at Brady’s next stop. Anything concerning Brown should be taken with not a grain but a bucket of salt at this point, but it does seem as if Brady and Brown formed at least some level of connection in their incredibly brief time together in New England.

It’s important to note that the ESPN report does cite Antonio Brown’s reps as the source here, and that, obviously, things should be taken with a bit of a grain of salt because of the wide receiver’s current positioning with the NFL. Remember, Brown is waiting to hear any next steps regarding his future in the league following a slew of off-the-field issues that include run-ins with cops and serious sexual assault allegations.

That said, Tom Brady has teased all of us before about his adoration for Brown, seemingly giving signals that he really wants to play with the former All-Pro talent. In just one game with the Patriots last season together, Brady and Brown connected for 4 catches, 56 yards and one touchdown, so it’s clear the two could be a potent duo.

Given the way Brown dissed the Patriots’ organization following his release, the reported news from ESPN doesn’t bode well for Pats fans hoping to see Brady return — because there’s probably no way in hell Robert Kraft and Bill Belichick brings back AB. So, just when you thought the Tom Brady free agency drama couldn’t get any wilder, this little rumor throws a huge monkey wrench in what could unfold in a few weeks. Stay tuned.