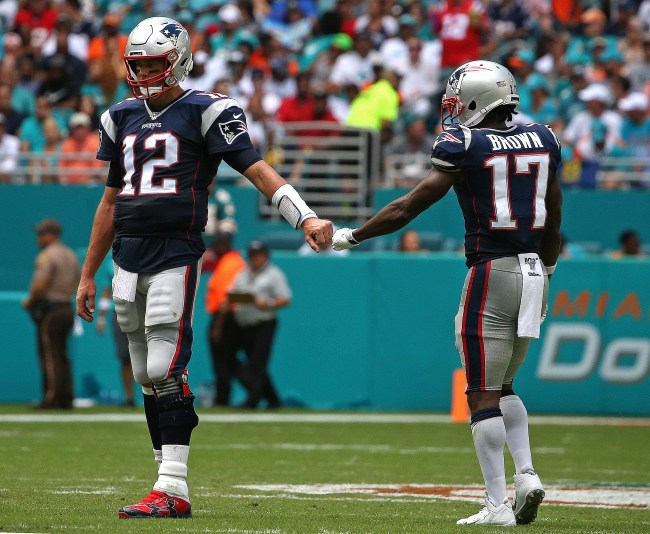 Tom Brady is the GOAT, so it would seem as if the New England Patriots would do anything and everything possible in order to keep him happy, right? Well, as we’ve seen over the past few seasons, it seems like there may be a bit of a strained relationship between some in the franchise and the future Hall of Fame quarterback, and, whether that’s validated or not, some of Brady’s latest comments sure makes it seem legit.

After the Patriots released wide receiver Antonio Brown after just one game and 12 days, it was apparent Tom Brady didn’t agree with the decision. Some of that frustration has boiled over to the previous few weeks, with Brady discussing the lack of playmakers and explosive plays on the Pats’ offense. Hell, it even led to a recent rumor that the team was reportedly exploring the possibility of bringing back AB; although that has been squashed for now.

Bottom line is this, though: Tom Brady doesn’t seem to be on the same page with his front office on adding talent to the offense. And it’s something that the signal-caller spoke about with Westwood One during his weekly radio appearance, as he downplayed his role in influencing decisions when it comes to free agents like Antonio Brown. Take a look at what the six-time Super Bowl champ had to say.

“I don’t think those decisions, honestly, are up to me,” Brady said on Westwood One, via Ryan Hannable of WEEI. “They are not up to me when we cut players or sign players. I think the people in the personnel department decide those things. My job is to play quarterback, and that is what I’m trying to do as well as I possibly can.”

Kudos to Tom Brady for not taking the bait when it came to discussing the rumors related to re-signing Antonio Brown, but, man, does this sound awkward to anyone else? Maybe the NFL’s different than the NBA in that front offices don’t consult superstars about personnel decisions, but one would imagine that Brady would at least be asked what he thinks, right? I mean, sheesh, the guy has guided the franchise to nine Super Bowl appearances since 2001, so he’s sort of got some influence.

Maybe I’m just reading into all this too much, but hearing Tom Brady sort of frustratingly say what he did on the radio appearance is kind of the latest example that things aren’t all that great with the Pats. That said, he is right that his job is to play quarterback, and didn’t necessarily say the front office doesn’t consult him about things.

Still, given some of the rumors about his future with the Patriots — with some speculating he could leave after this season — this can’t sit well with fans of the franchise, as it’s another example of an uncomfortable relationship.