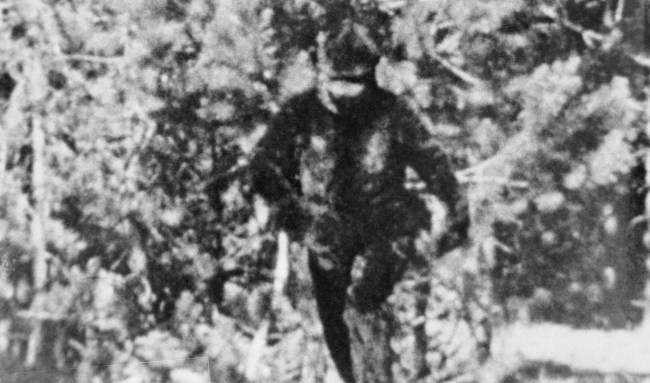 We have another location to keep an eye on as a possible home base for the always elusive Bigfoot: the state of Washington.

This latest Bigfoot encounter comes to us from a woman named Jennifer Powell O’Neal, who posted about her recent Bigfoot experience on the Washington Bigfoot Facebook page on October 17th.

“Was up by Mt St Helens yesterday and while driving I looked over and saw these going up a hill,” O’Neal wrote. “I had to climb up a bit to get to the first print. There were 3 total to the top and I couldn’t safely get up the rest of the way to check at the top of the hill.

“I’m wearing a size 8 mens shoe, I used a piece of floss to get a proper measurement when I got home and it was 21.5 inches long.

“I looked for possible prank by human but it would have been impossible to have made them with no actual foot prints leading up. Also looked for marks from bear claws in dirt and none.

“A few years back I also took photos of other prints I found on this same road and few years before that while camping we heard calls that at that time I didn’t realize could have been from Bigfoot all in this area,” she continued.

“I regret now a lot of things I should have done but the excitement overwhelmed me and the fact I had my mom and stepdad who is a non believer also made it even that more exciting that someone other than my husband saw it.”

Related: Pair Of Bigfoot Spotted Entering Coal Mine In The Mountains Of Northwest Kentucky

BFRO Director and Investigator Matthew Moneymaker writes in his report…

I spoke with witness Rudy Peone by phone. He is credible and available to speak with local journalists about this irecent incident, 25 miles northwest of Spokane.

The incident happened at night but there were multiple witnesses. The other witnesses were children who were facing each other and talking when the figure first came into the drivers view. They turned to look just as the vehicle was passing the figure. They didn’t see the same amount of details as the driver but they did all see a big dark figure among the yellow grass, illuminated peripherally by the headlights. They also saw that the figure was no longer there when the driver eventually turned around and drove back for a second look.

Rudy said it stepped away from the ditch edge and into the ditch as it was still haunched over, as if it was trying to avoid the headlights. Then it turned to watch as the vehicle passed by.

He is certain that it walked on two legs and has two arms and hands and a head more like a human than a bear or wolf.

So now we can definitely add Washington, to Kentucky, Idaho, Michigan, Oregon, the Florida panhandle, northern California, Oklahoma, North Carolina, and West Virginia to our list of potential habitats for the mythical cryptid, Bigfoot.

[Top photo: Wilderness explorer C. Thomas Biscardi, 32, of San Jose, California, who has been searching for the legendary “Big Foot” for nearly a decade said, May 10, he encountered and took pictures of the elusive man-ape during a recent expedition in northern California. Biscardi, president of Amazing Horizons Inc., concedes the front-view photos of a large ape-like figure emerging from a clump of trees may not be enough to convince skeptics. He said his next step is to capture the creature. ca. May 1981]