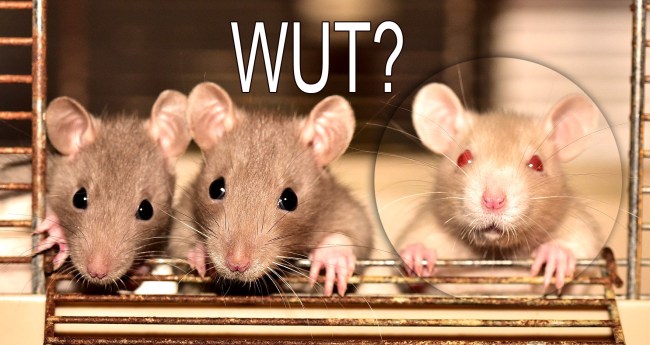 Once again, for some strange reason, scientists are out there doing stuff to hasten the coming robot apocalypse.

Remember how I reported back in January about how scientists were in the process of moving us yet another step closer to a real-life Westworld by creating robots from living cells?

Yeah, well, the geniuses over at the University of Illinois at Urbana-Champaign just created some miniature biological robots they’re calling “spinobots” that are, and I quote, “powered by rat muscle and spinal cord tissue on a soft, 3D-printed hydrogel skeleton.”

“These are the beginnings of a direction toward interactive biological devices that could have applications for neurocomputing and for restorative medicine,” said study leader Martha Gillette, a professor of Cell and Developmental Biology.

That’s not the only thing this is the beginning of there, boss.

To make the spinobots, the researchers first printed the tiny skeleton: two posts for legs and a flexible “backbone,” only a few millimeters across. Then, they seeded it with muscle cells, which grew into muscle tissue. Finally, they integrated a segment of lumbar spinal cord from a rat.

“We specifically selected the lumbar spinal cord because previous work has demonstrated that it houses the circuits that control left-right alternation for lower limbs during walking,” said graduate student Collin Kaufman, the first author of the paper. “From an engineering perspective, neurons are necessary to drive ever more complex, coordinated muscle movements. The most challenging obstacle for innervation was that nobody had ever cultured an intact rodent spinal cord before.”

The spine and muscle were connected to a flexible scaffold with two arms sticking out perpendicular to the spine, so that when the muscle contracted, the scaffold flexed and the arms pointed towards one another.

“The spinal cord is able to recognise these muscles and do what it does in the body – create these rhythmic contractions – after being out of the body for more than a week,” says Kaufman. The contractions could be controlled by adding or removing neurotransmitters from the system.

As for why these scientists are flirting with making robots more human-like than ever, Kaufman said, “The development of an in vitro peripheral nervous system – spinal cord, outgrowths and innervated muscle – could allow researchers to study neurodegenerative diseases such as ALS in real time with greater ease of access to all the impacted components. There are also a variety of ways that this technology could be used as a surgical training tool, from acting as a practice dummy made of real biological tissue to actually helping perform the surgery itself.”

Okay, fine. I guess those are good reasons.

Still… someone needs to keep an eye on these folks.

Previous signs of the impending robot takeover…
• Taiwanese baseball team putting robot mannequins in stands to replace actual fans because of course they are
• Sex robots could sexually assault humans because of all-too-realistic AI, according to computer science professor
• Scientists move us one step closer to a real-life Westworld as they create robots from living cells
• Artificial intelligence can now recreate videos people are watching by reading their minds
• Humans one day soon will emotionally bond, fall in love and marry robots, claims philosopher
• Massachussetts police secretly used robot dogs for three months so the countdown to the robot uprising has begun
• Boston Dynamics robots have figured out how to work together and I guess humanity had a pretty good run
• Oh hell no, now there’s a robot that bleeds, breathes, pees, and has a pulse? We’re all so f**ked
• Elon Musk is planning on having cyborgs living side-by-side with humans in the near future
• Robots can now solve a Rubik’s Cube, one-handed, in their latest step towards becoming our new overlords
• New study says robots will soon be able to recognize human emotions, which will be very helpful when their uprising begins
• The Marines are turning to artificial intelligence to combat enemies’ most deadly weapons
• These more than 25 creepy ways robots are becoming more human spells doom for us all