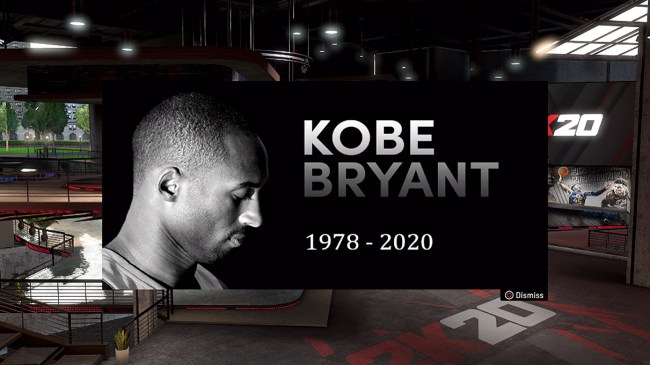 There are few words left to describe the devastation so many NBA fans, family, and friends are feeling in the aftermath of the helicopter crash that killed Kobe Bryant, his daughter Gianna and seven others.

Among the millions of NBA fans, few are as diehard as those who are devotees to the video game NBA 2K20, many of whom grew up with Kobe Bryant being one of the few constants in sports throughout his 20 year NBA career.

As such, gamers the world over have been creating their own tributes to the five-time NBA champion with their own 24-second and 8-second violations, participating in parades and other celebrations of Kobe’s life in the game’s “Neighborhood,” wearing Kobe jerseys and other apparel created in his honor, and numerous other displays of respect for a man who impacted so many.

Someone online just took a 24 second violation against me in 2K💙 pic.twitter.com/GlN0AoljJo

#NBA2K20 KOBE BLOCK!!! We out here for you… R.I.P Goat❤ pic.twitter.com/aENOlMAXEP

The 2K Community Showing Respect For Kobe Bryant And His Daughter Passing Away. 💜💛🕊 #NBA2K20 ( VIA @Joqorr ) pic.twitter.com/VHkOOVgLPd

My bro sent me this video of players paying their respects for Kobe on 2k pic.twitter.com/HaHU1wRhKO

Me and the squad paid our respects. Then the random opponents returned the favor. 🙏🏼🙏🏼🙏🏼 #kobe pic.twitter.com/go1xyzcsx7

Totally heartbroken. He’s a big reason why I and many 2K fans grew to love basketball. His drive for getting the most out of life is to be aspired especially in the light of this absolutely tragedy. Life is short, we all need to live it to its fullest.#RIPKobe pic.twitter.com/Nx5uARg2HS

As for the game itself, published by 2K Games, it currently offers its own in-game tribute to the fallen star as gamers log on to NBA2K20.

Just loaded up NBA 2K20 to play as Kobe and this pops up. There's tears, man. pic.twitter.com/01Y2g4lHP8

RIP to a Legend. Thank you for your many contributions on and off the court. You are greatly missed pic.twitter.com/XesYS63Uhp