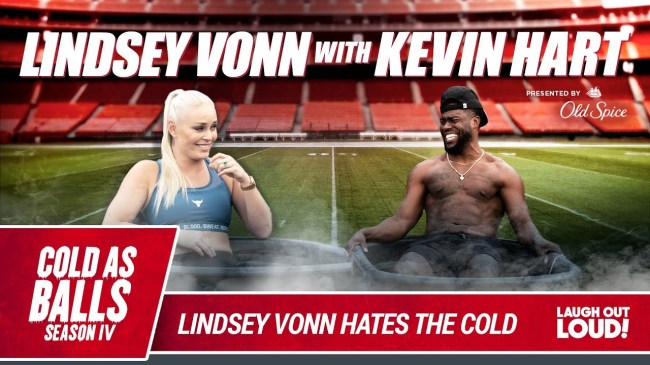 Lindsey Vonn grew up in the Twin Cities in Minnesota. She is about to marry an ice hockey player (P.K. Subban). She is a four-time World Cup champion in alpine skiing. Vonn won the gold medal in downhill at the 2010 Winter Olympics. And she won a record eight World Cup season titles taking home 82 World Cup victories in her career.

And she absolutely hates the cold. Go figure.

“Do you understand how backwards that is?” Hart asks Vonn as she complains about hating the cold upon entering the ice tub. “Do you know what your profession is? Do you know where you have succeeded? … You’re profession, was skiing. Skiing is done on this stuff called snow. Snow, last I checked, is cold. So how do you not like the cold?”

Then she reveals to Hart that she is from Minnesota.

It’s at that point she admits she had heated pants at the end of her career, for which Hart mocks for being “so good” she got heated pants.

That’s when Vonn decides to not hold back with the short jokes that we know Hart loves so much.

Later in the interview, Hart dismissed Vonn’s husband claiming he plays hockey for a living.

“He tried to convince me that he plays hockey,” said Hart. “He’s black!”

Also during the interview, Hart brings up the fact that Vonn is the first female to be signed under the Under Armour Project Rock umbrella. Which then leads to her saying she just spoke to The Rock and he had three messages for his buddy Kev.

Vonn and Hart also hit on a number of other interesting topics like how she got into skiing and her plans for the wedding. Check it out below.