A Guide To The Stoke Activism Of Chad & JT Go Deep, Now Out On Netflix 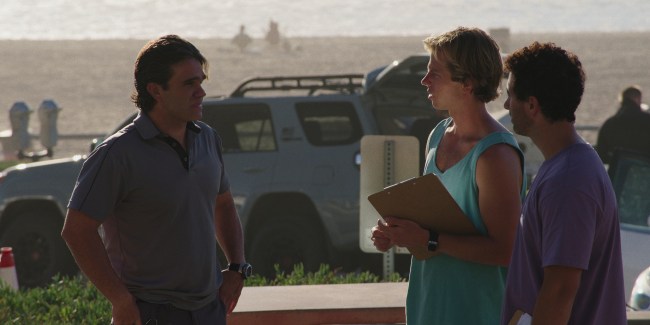 Three years in the making, it’s unlike anything you’ve ever watched before. It’s part satire and part deadpan prank comedy, all while being endearingly earnest and mission-driven. Think: Borat meets Nathan For You meets Bill & Ted’s Excellent Adventure, with more public access TV footage and a healthy peppering of Bro-isms, including an intoxicating use of the word “stoke”.

Warning: Spoilers below. But let me tee it up…

Chad & JT Go Deep is filmed like a documentary, with the two “Party Bros” – as Fox News’ Jesse Waters started dubbing them – never breaking character in six episodes. The series is the ultimate examination of what they excel at – viral stunts like a small dong march in Downtown LA and perineum sunning, threaded with a uniquely interpersonal story arc. They have an unwavering commitment to the bit and the inside jokes they’ve built into their cinematic universe of the years: Scooters, shmoles, dying your dome for the coral reef, Paul Walker statues. To those familiar with Chad & JT’s comedy orbit in its various mediums, it’s all here.

Southern California activists and best buddies are canceled for circulating a petition to “protect our boarders” (meaning, skateboarders). This turns into a classic Hanlon’s razor situation (“never attribute malice that which is adequately explained by stupidity”). Their buddy Zedd – the DJ – isn’t too happy about their newfound negative stigma, disinviting them from a show in Vegas where they can advocate for spreading the stoke.

Without giving too much away, their fall from cultural grace sends them on a hero’s journey for redemption, gutting sacred cows about masculinity, identity, and personal vulnerabilities. They’re also magnets for some of Southern California’s most eccentric and outspoken oddballs, drawing a hearty mix of surfers and beach town NIMBYs into their gravitational pull. The resulting laughs are so uniquely Californian – like Vans and acai bowls.

Before you smash the play button on Chad & JT Go Deep on Netflix, take a moment to consider the five-year journey it took for these two Internet legends to make it to this career mile marker. We’ve covered a lot of it around here over the years. Some greatest hits:

That’s just a drop in the bucket of the Chad Goes Deep canon.

Just before the show’s release on Netflix, I got a chance to talk to Chad (real name, Tom Allen) and JT about their Netflix show in all its small dong and beer bong glory. How would they describe the scene from the show at an iconic spot from the Fast & Furious franchise?

Here’s what America’s greatest stoke lords had to say, in their own words. 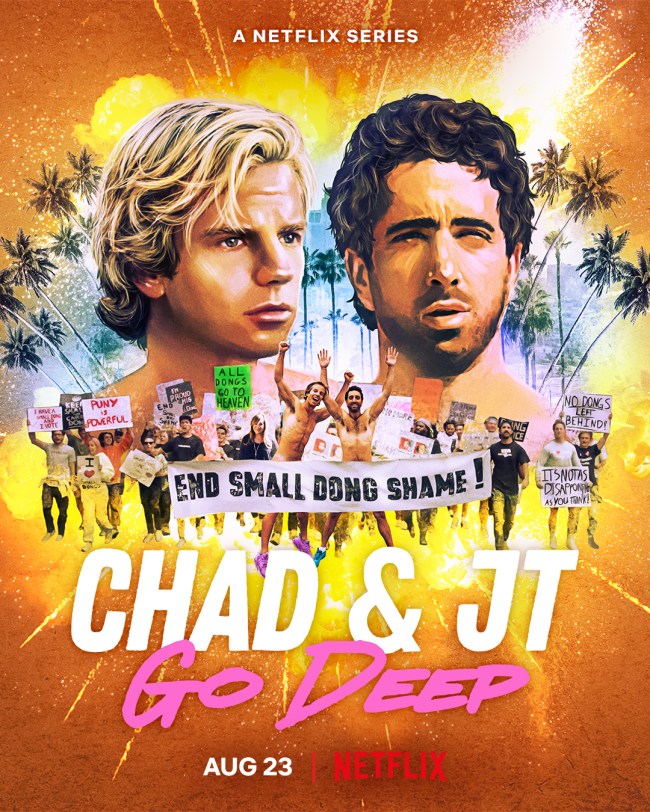 Chad: It’s very surreal. I mean, ’cause we’ve been working on it for like three years. COVID came in the middle and we had like a year and a half delay with that.

I always thought about the moment that it would come out. It’s really hard to believe it’s real, you know?

JT: I’m almost treating it like it’s this baby that we raised and now it’s going away to college and I’m just like, go live your life at college, go have fun. It’s like, our part is done and now it just exists on its own and it has to, yeah, it’ll live its life and we’ll see how it goes, but I’m proud of it. I’m proud of my little baby. 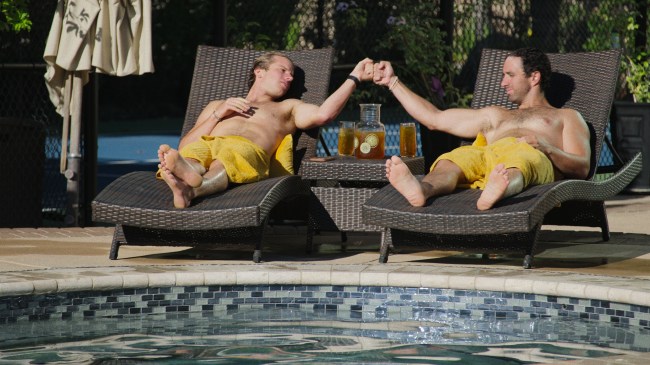 On the characters encountered while filming…

JT: You know what it is? It’s like ’cause they’re everywhere and I think we’re attracted to them. And the thing about people like those characters is that they’re all real. They’re just people we met, you know what I mean, and talked to, but they all have a spark, they all have just a personality that’s just begging to get out.

We’re lucky that with our activism, we just get to talk to strangers. It’s really not much planning. It’s kind of just saying what up to them and then letting them go from there.

Chad: Yeah. We’re speaking to these causes that are pretty universal that everyone kind of loves: parties, small dongs, scooters… all that kind of stuff is like stuff that people think about. So it’s giving them an opportunity to speak on it. They’re always excited to do it, I think.

Brandon: I think the NFT scenes are a really good example of man-on-the-street gone haywire…

JT: That was a very unpredictable moment, and those two guys, they kinda lost their cool obviously, but I will give them credit ’cause they said some of the funniest things I’ve ever heard when they were fighting, and fights really do just elicit the best dialogue.

If I read a transcript of this show, I think my three favorite lines would all come from those two guys when they were jawing at each other.

Brandon: “You eating your cheap little nachos” or something?

Chad: “Your f*cking cheap ass nachos, I’m talking to them.”

These are all things I’ve never heard said, especially the CNN one. Using that as a threat was pretty inspired.

Chad: But I gotta say, whenever I beef with someone, I’ve always had the internal thing of like, “Man, I hope my balls are bigger than this dude.” 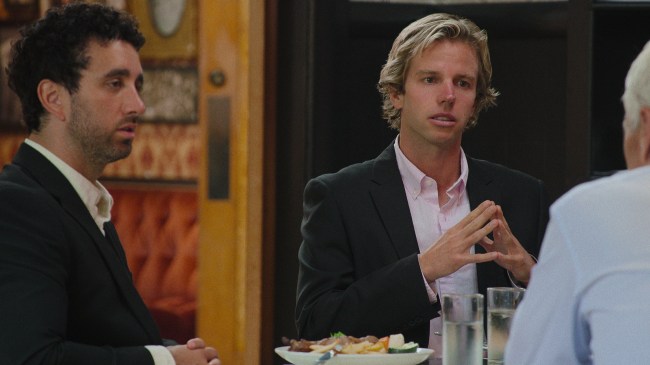 Brandon: It was tremendous, I couldn’t believe you kept it down… It looked like it was more than one beer in that beer bong.

JT: It was a pitcher and we had to do it a couple of times, but I think…

Brandon: A couple of takes on the beer?

JT: Yeah. [chuckle] It was all the Santa Barbara kids, like it was their idea, they built it… We helped to coordinate. Me and Chad were overseeing the kind of process of it, but that was really inspiring just to have those young’uns grab the bull by the horns and just make everything happen. So I gotta be deferential to them on it; they knew the science and they executed it. 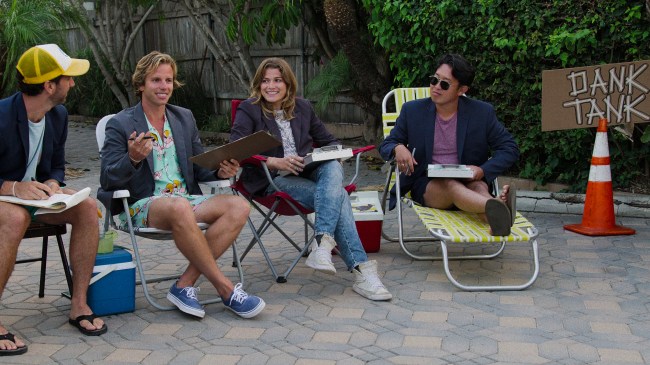 JT: Yeah. My dong has always been a part of my culture. I grew up… I got suspended in high school for streaking, so I’ve always been consistent in my expression.

Chad: Yeah. I was actually shamed in high school when I… We streak… It’s part of graduation, you streak the night before, and I got shamed, some… I think some junior was like, “He has a small dong.” And so to be able to be like, “Well, you think that, then I’m gonna put it on Netflix,” is sort of a big sort of F you to anyone who wants to shame my d*ck.”

JT: Yeah. ‘Cause I think… And I think we stayed in the show, the truth comes out, if you got a small dong, people are gonna find out. So I always think, get out in front of that thing and control the narrative and make you… Have big dong energy when it comes to showing people your small dong respectfully and tactfully and consensually. But yeah. 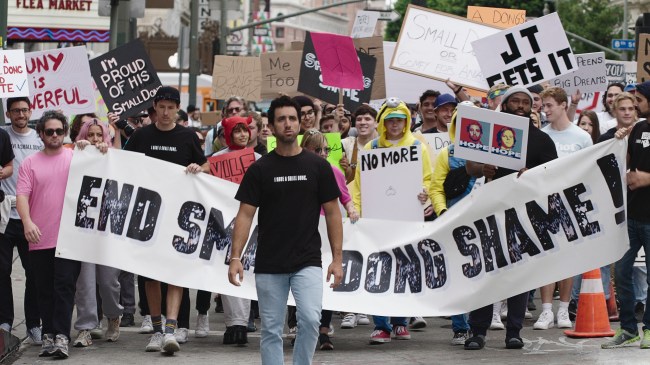 On how their activism can inspire others…

JT: That’s a good question. I genuinely don’t know if we thought about it that far. We wanted it to be honest about who we are and we wanted to push ourselves to be as honest as possible within the framework of our activism. Of just being out in the world.

I guess I would hope that dudes would get stoked on us being sensitive. It’s weird even to say out loud because I’m happy if anyone takes anything away from the show.  But however they choose to respond to it, I’d be stoked if dudes were like, “Whoa, that was really sweet when they got real with each other.” That would be a nice takeaway.

Chad: I think with all relationships kind of, if there’s real love there, oftentimes people help you to sort of face the parts of yourself that you fear the most or that you’re unwilling to face on your own. They sorta help you to break free from those things holding you back from expressing your true self.

So I think with this show, in particular, it’s just sort of like facing those fears will help you to grow into a bigger person, and oftentimes the people around you are gonna help you do that. If that makes sense. 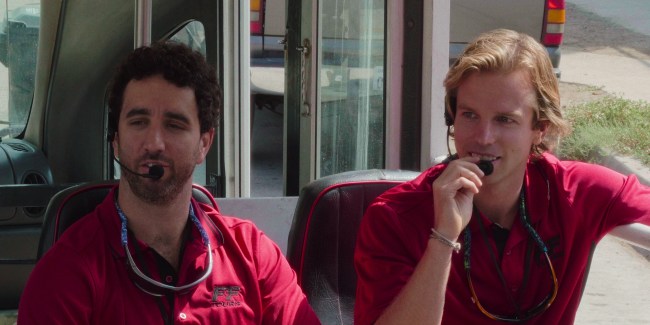 On being the best Bro you can be…

JT: You can always accomplish more if you got a team or some homies with you and you guys are working together and keeping each other accountable. I think that’s a big takeaway I want people to have. ‘Cause in my experience, most bros are actually pretty hospitable and pretty open, they just wanna have a good time, and I think people know that, but it’s been shrouded in other stuff that’s valid as well,…

Yeah, if people watch this and they’re like, “I wanna hang out in Orange County with guys like this,” that’ll be sick. I mean parking at Salt Creek is gonna suck, but it’s worth it.

Chad: We’ve always sort of identified as sensitive bros. In pop culture, bros are always sort of portrayed in a negative light as a toxic kind of bro, I think that’s the most standard thing you see nowadays. So I think being able to present this new kind of enlightened bro that embraces what we call positive masculinity.

Something other bros out there can emulate in their own lives and not be afraid to do it. 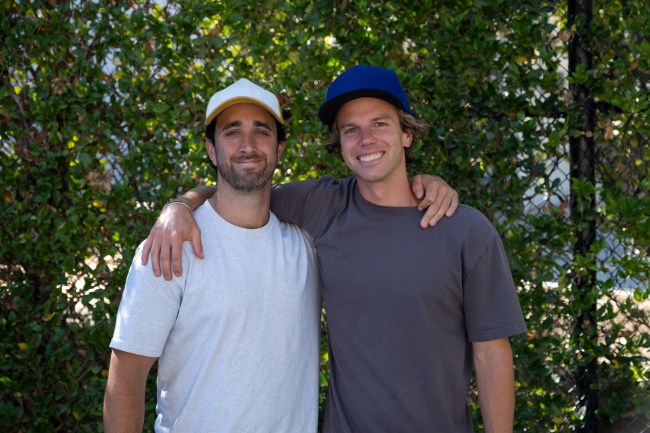 On inspiring others with their activism…

Chad: Yeah. First off, it’s more accessible than you think to speak to the government, to speak to your officials, to address them head-on. If you have something burning inside that you wanna speak out about that you wanna tell the world or you wanna change in the world, it’s like… I always say my favorite days are ones where I pretty much do productive things all day. It may seem daunting at first to go out and try and create that change but once you do it, you’re gonna feel so stoked, you won’t even know what to do with all of that energy.

So… take the first step and start, then see where it goes. I guess that’s my advice. 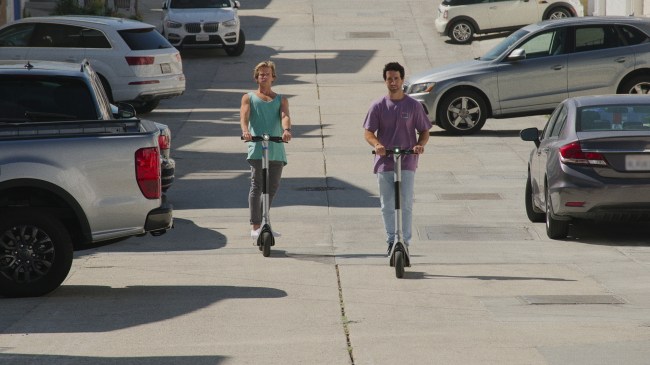