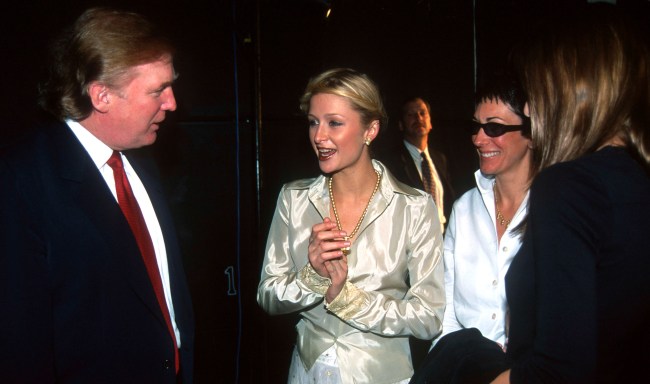 Now that longtime Jeffrey Epstein confidante and former girlfriend Ghislaine Maxwell has finally been put into custody for her alleged participation in the convicted pedophile’s alleged underage sex trafficking ring, some of the sordid stories surrounding their years together are slowly beginning to come out.

Among those stories, is one that was told on a new documentary series which aired on Lifetime this past Sunday and Monday called Surviving Jeffrey Epstein.

During the fourth episode of the docuseries one of Maxwell’s former associates, journalist and TV presenter Christopher Mason, who has known Maxwell since the 1980s, recounted a tale involving a young Paris Hilton.

“A friend of mine was at a party and Ghislaine said, ‘Oh my God, who’s that?’ and was looking at this pretty, young, sort of teenage girl,” recalled Mason, as the photo seen above of Hilton, age 19, at a fashion show in September 2000 with Maxwell and Donald Trump was shown.

“And she said, ‘Do you know her?’ My friend said, ‘Yes, she’s called Paris Hilton.’ And Ghislaine said, ‘God, she’d be perfect for Jeffrey. Could you introduce us?’”

While Mason did not give a date for the encounter, it appears to have been around the time Hilton signed with Donald Trump’s modeling agency, T management, in 2000.

Mason added that it was common knowledge that while people were “puzzled” by Maxwell and Epstein’s relationship, many within his social circle were aware that Maxwell was recruiting young girls for him.

“The rumors were Ghislaine was scouring New York finding younger girls to go on dates with Jeffrey. At the time it seemed a bit naughty,” said Mason.

Barbara Ziv, a forensic psychiatrist and expert in sexual assault, also spoke in the documentary and hypothesized that Maxwell and Epstein “may have been a mutually parasitic relationship.”

“I don’t think there’s any evidence Jeffrey Epstein was capable of having any deep feelings for anyone but that doesn’t mean he doesn’t know a good exchange relationship where he finds one,” said Ziv.

Mason has also stated that he believes Maxwell will eventually start naming some big names in an effort to save herself from a lengthy prison stay.

“She, of all of those people, knew who slept with whom, and who was assigned to whom,” he told the New York Post.

“If Ghislaine goes down, she’s going to take the whole damn lot of them with her,” Mason told the Daily Mail, adding that Maxwell has a secret stash of sex tapes involving many famous people who participated in Epstein’s sick sex ring.

Maxwell, who calls the charges against her “absolute rubbish,” faces up to 35 years in prison on charges of enticement and conspiracy to entice minors to travel to engage in illegal sex acts, transportation and conspiracy to transport minors with intent to engage in criminal sexual activity, and two counts of perjury. Her trial is currently scheduled to begin on July 12, 2021.