According To ESPN Analyst, One Of These Three Sleeper Teams Could Find Themselves Landing Deshaun Watson 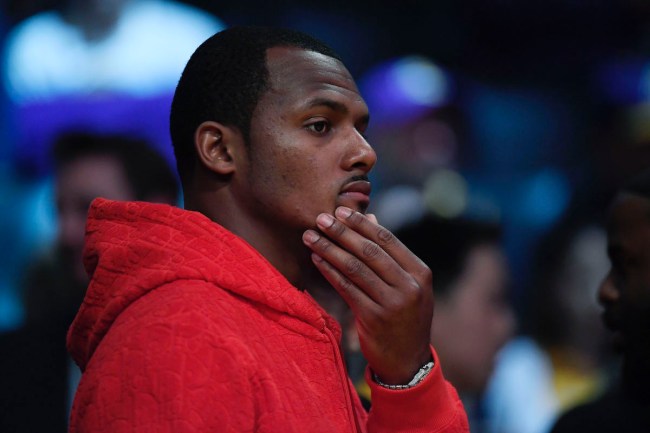 Another day, another batch of Deshaun Watson trade rumors, as the Texans quarterback continues to find himself involved in a hot mess of a situation down in Houston. While nobody knows for sure what’s going to happen between the Pro Bowl signal-caller and the organization, things don’t look great at the moment, with Watson cryptically tweeting the team, reports of him ignoring phone calls from the front office, and the 25-year-old really disliking the team’s owner Cal McNair.

Things are so bad that, earlier this week, Texans fans even planned a protest in support of Deshaun Watson, hoping the strong message would lead to the quarterback getting what he apparently wants: A fresh start elsewhere. Watson shut the idea down by tweeting out this message, encouraging people to stay safe given the ongoing pandemic.

I’m hearing there is a march planned on my behalf in Houston today. Although I am humbled I ask that whoever is organizing the march cancel for the sake of public safety. Covid is spreading at a high rate & I don’t want any fans to unnecessarily expose themselves to infection.

Needless to say, this is the point we’re currently at in the Deshaun Watson trade rumors, where his own fans are pushing for the Texans to trade him. That’s insanity, but, hey, welcome to 2021, fellas.

Of course, all of this turmoil stems from the Texans apparently not discussing their future GM and head coaching plans with the franchise quarterback. All Watson wanted was some input, but the team didn’t acknowledge the request and, well, this is the fallout of it all.

It’ll be hard to put the genie back in the bottle and repair this relationship with the franchise, so, while Watson hasn’t formally asked for a trade — other than just presumably hinting at it on social media — there are plenty of people around the league that thinks it’s inevitable. And because of that, ESPN’s Jermey Fowler listed three sleeper teams who might just find themselves in the Deshaun Watson sweepstakes should things start heating up. Here’s what Fowler had to say on Get Up Wednesday morning.

Now, just the other day, there were reports linking the Carolina Panthers to Watson, so that may not be much of a shock. Even after signing Teddy Bridgewater last offseason, the team would undoubtedly upgrade the quarterback position if it’s able to land the Pro Bowler. Then again, teams like Washington and the Chicago Bears — who passed on drafting Watson in the 2017 NFL Draft and got ripped for it — could force their way into discussions as well.

For his part, Deshaun Watson really isn’t bringing attention to all of this publicly, so who knows if he’s torn about what he really wants or not. After signing a four-year, $160 million extension in 2020, he vowed commitment to the Texans. Then again, the team refused to give him input on critical hires, so he may feel betrayed by all of this. Depending on who you ask, Watson either needs to continue to stand his ground and force his way out of Houston, or he needs to change his diaper and man up, accepting the fact he doesn’t deserve preferential treatment from the Texans’ front office.

With the Texans expected to move on from longtime star J.J. Watt and go into rebuilding mode, it’s time for the team to seriously entertain these Deshaun Watson trade rumors and accelerate that process. The quarterback’s not even yet in his prime — and the position is the most crucial in all of sports — but Houston either needs to go all in to reshape the roster, or fall victim of winning about six games in each of the next couple seasons and wasting Watson’s talents.