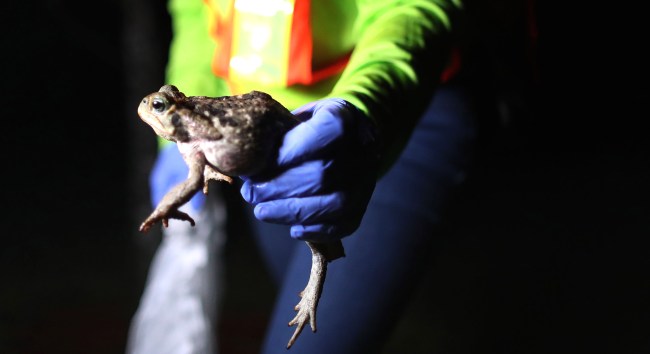 Nature, you so cray cray.

The Miami Herald reports that, yes, in addition to all those other insect and animal threats, now we have to start worrying about giant toxic cane toads. (Assuming when don’t get cratered by a giant asteroid this weekend.)

Though these scary-looking toads are generally harmless to humans, they can be dangerous for pets. The amphibians, which average between 4 and 6 inches but can grow to 9 inches, have large triangular glands behind the eyes that contain a high load of a milky-white toxin that can kill dogs, Kern said. If a dog bites or licks the slow-moving frog and gets some of the poison in its mouth, it can suffer convulsions, loss of coordination and cardiac arrest.

During the rainy season, when the toads are breeding and are generally more active, dog owners must watch out for signs of poisoning: excessive drooling, red gums, vomiting, disorientation, circling, stumbling and falling, and seizures.

Oh, my, god… that sounds like an absolutely horrific way to go. Everyone is south Florida needs to self-isolate their dogs immediately. Cats who go outside, however, are free to still do whatever.

These cane toads have no predators and, according to the Herald, will “eat pretty much anything: small lizards, snakes, bugs, and even smaller native frogs.”

And much like other invasive species such as the voracious Burmese python, cane toads do well in Central and South Florida’s urban environments. With hundreds of man-made lakes and canals, and plenty of bugs year-round, this is paradise for them.

“We have dozens out on the street at night. They are not even scared of people anymore, it’s like there are gangs of them out this year,” said Elizabeth Bonilla, who lives near a canal in Homestead. Her technique for getting them out of her backyard is to stomp and chase them out until they leave. “I can’t bring myself to kill them.”

Related: Sensing Freedom, Huge Pet Python Goes Rogue, Bites Owner And Wraps Itself Around Her In A Flash

Six months ago, Animal Planet did a piece on how cane toads were threatening to destroy the native wildlife in Australia.

So keep in mind that if you run into one of these creatures, whatever you do, please, don’t inhale or ingest any of these cane toad’s venom. I promise you it will not end well.