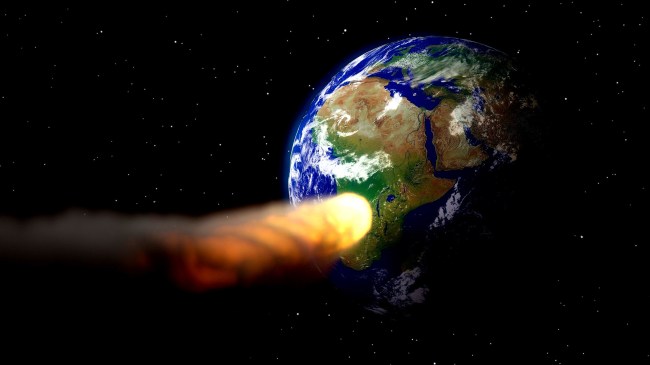 As if we all didn’t have enough stress in our lives, now we have to worry about an Aten-Class Near Earth Asteroid, 163348 (2002 NN4), classified as Potentially Hazardous by NASA, will be flying by Earth in alarming proximity this weekend.

For those unfamiliar, SpaceReference.org describes an Aten-Class Asteroid (ATE) as an object “whose orbit could bring it in close proximity to Earth.”

NASA also refers to it as a Near-Earth Object (NEO) and in the case of Asteroid 163348 (2002 NN4) it’s also referred to by the space agency as a Potentially Hazardous Asteroid (PHA) which is defined “based on parameters that measure the asteroid’s potential to make threatening close approaches to the Earth.”

Below are NASA diagrams showing the anticpated orbit of Asteroid 2002 NN4 as it crosses paths with Earth’s orbit. 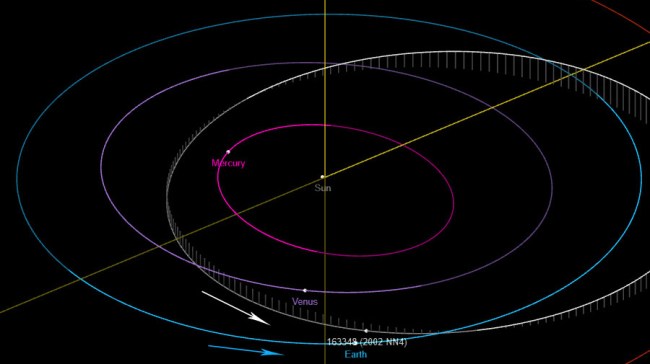 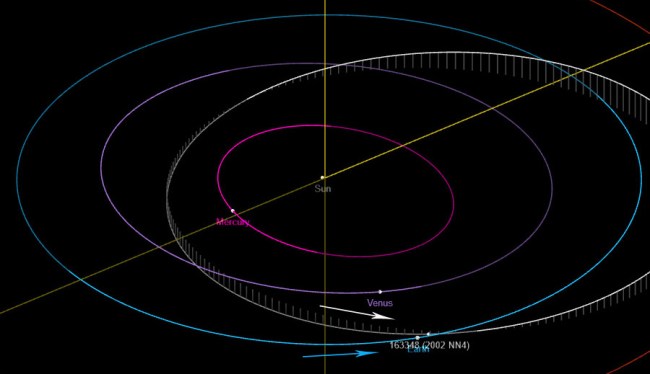 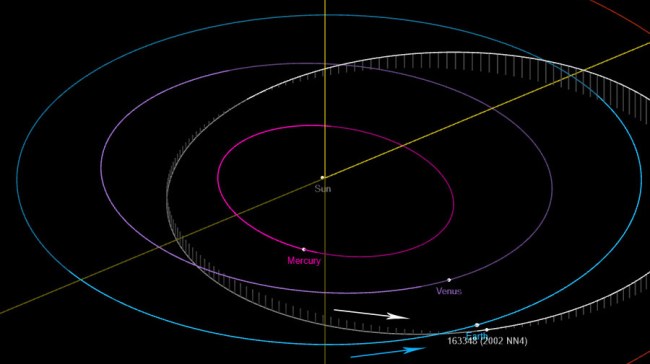 When it does pass by it will only be just 0.034 astronomical units (AU) away from Earth. For comparison purposes, Mars is 0.52 AU from Earth, while our moon is 0.0026 AU from our planet.

In addition to that happening, Asteroids 2020 KO1 and 2020 KQ1 will also be making a pass by our planet on Saturday.

Luckily for us, according to Ian J. O’Neill of NASA’s Jet Propulsion Laboratory, “2002 NN4 is a very well-known asteroid with a known orbit that will pass Earth at a (very) safe distance.”

Then again, what else is he going to say? The asteroid is coming straight for us and there’s nothing we can do to stop it? Oh… right.

Previous asteroid news…
• PSA: A ‘potentially dangerous’ asteroid almost a mile wide is on ‘close approach’ with Earth
• Heads up, there is an 1,100 foot wide asteroid heading our way and it’s going to get very, very close
• Did you feel that? 4 asteroids just buzzed Earth, one only a third of the distance from here to the moon
• Researchers now believe massive interstellar object discovered in 2017 was ‘ripped’ from an alien planet
• Alien expert believes he’s uncovered a extraterrestrial base on an asteroid in NASA image
• NASA is tracking a monstrous asteroid on Earth approach with the potential to wipe us all out
• Head for the bunker, NASA is tracking a giant asteroid on earth ‘approach’
• Heads up, a pack of asteroids is hurtling towards Earth at speeds of up to 27,500 MPH this weekend
• Russia plans to build a base on the moon to track asteroids on a collision course with the Earth
• Space agency expert predicts ‘serious impact’ from an apocalyptic asteroid: we ‘need to do something about it’
• Apocalyptic will hit in the next decade and space agencies are covering it up, says biblical scholar
• NASA reveals 10 dates when Apophis, the ‘Colossal God of Chaos’ asteroid, could smash into Earth
• NASA says city-killer asteroid the size of The Great Pyramid of Giza will have a chance of smashing into Earth in 2022
• A potentially hazardous’ 3,000-foot long asteroid is flying by Earth: here’s how to watch it
• NASA has spotted a giant Apollo asteroid, the most dangerous class of space rock, on a concerning Earth-orbit
• New asteroid detected, named the fourth most dangerous to hitting Earth according to the European Space Agency
• Space agencies are going to crash a spacecraft into an asteroid at over 14,000 mph to see what happens
• Experts warn ‘100 percent’ chance of asteroid colliding with Earth and action needed to prevent mass extinction