Heads Up, There Is An 1,100 Foot Wide Asteroid Heading Our Way And It’s Going To Get Very, Very Close 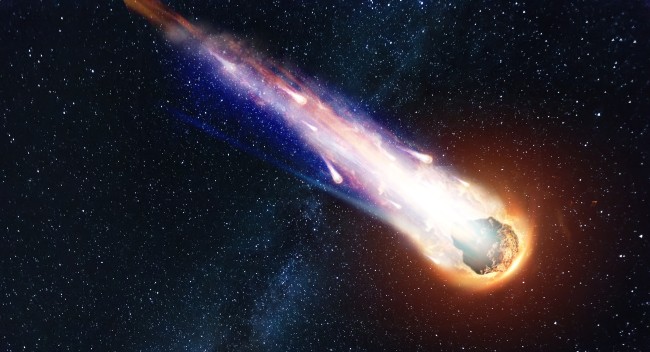 Mark your calendars. April 13, 2029. That’s the day a monstrous 1,100 foot wide asteroid is going to go zooming by Earth at a rather alarmingly close distance from the planet.

In fact, when asteroid 99942 Apophis (2004 MN4) buzzes our planet it will be so close that it will actually be visible to the naked eye.

If that isn’t intimidating enough for you, NASA kindly explains on their web page for the 99942 Apophis asteroid, “Also known as Apep, the Destroyer, Apophis is the Egyptian god of evil and destruction who dwelled in eternal darkness.”

So now we can add a “God of Evil and Destruction” asteroid to the “Colossal God of Chaos” asteroid that’s already out there waiting to blow us all to smithereens.

Related: NASA reveals 10 dates when Apophis, the ‘Colossal God of Chaos’ asteroid, could smash into Earth

On top of that, the 99942 Apophis asteroid, which NASA has classified as a Potential Hazardous Asteroid, is going to come so close to Earth that it might actually smash into a few of the zillion satellites we have launched into our atmosphere.

Check out this rendering of Apophis’ potential flight path from NASA.

Related: There Is So Much Junk Floating Around Earth We May Not Be Able To Travel Into Space In The Future

Here’s another look at how over time the 99942 Apophis asteroid’s orbital path will eventually come to intersect with ours.

“The Apophis close approach in 2029 will be an incredible opportunity for science,” said Marina Brozović, a radar scientist at NASA’s Jet Propulsion Laboratory in Pasadena, California, who works on radar observations of near-Earth objects (NEOs). “We’ll observe the asteroid with both optical and radar telescopes. With radar observations, we might be able to see surface details that are only a few meters in size.”

“We already know that the close encounter with Earth will change Apophis’ orbit, but our models also show the close approach could change the way this asteroid spins, and it is possible that there will be some surface changes, like small avalanches,” said Davide Farnocchia, an astronomer at JPL’s Center for Near Earth Objects Studies (CNEOS).

“Apophis is a representative of about 2,000 currently known Potentially Hazardous Asteroids (PHAs),” said Paul Chodas, director of CNEOS. “By observing Apophis during its 2029 flyby, we will gain important scientific knowledge that could one day be used for planetary defense.”

On second thought, maybe you shouldn’t mark your calendars. Trust me when I say, sometimes ignorance really is bliss.

Previous asteroid news…
• Did you feel that? 4 asteroids just buzzed Earth, one only a third of the distance from here to the moon
• Researchers now believe massive interstellar object discovered in 2017 was ‘ripped’ from an alien planet
• Alien expert believes he’s uncovered a extraterrestrial base on an asteroid in NASA image
• NASA is tracking a monstrous asteroid on Earth approach with the potential to wipe us all out
• Head for the bunker, NASA is tracking a giant asteroid on earth ‘approach’
• Heads up, a pack of asteroids is hurtling towards Earth at speeds of up to 27,500 MPH this weekend
• Russia plans to build a base on the moon to track asteroids on a collision course with the Earth
• Space agency expert predicts ‘serious impact’ from an apocalyptic asteroid: we ‘need to do something about it’
• Apocalyptic will hit in the next decade and space agencies are covering it up, says biblical scholar
• NASA reveals 10 dates when Apophis, the ‘Colossal God of Chaos’ asteroid, could smash into Earth
• NASA says city-killer asteroid the size of The Great Pyramid of Giza will have a chance of smashing into Earth in 2022
• A potentially hazardous’ 3,000-foot long asteroid is flying by Earth: here’s how to watch it
• NASA has spotted a giant Apollo asteroid, the most dangerous class of space rock, on a concerning Earth-orbit
• New asteroid detected, named the fourth most dangerous to hitting Earth according to the European Space Agency
• Space agencies are going to crash a spacecraft into an asteroid at over 14,000 mph to see what happens
• Experts warn ‘100 percent’ chance of asteroid colliding with Earth and action needed to prevent mass extinction