Did You Feel That? 4 Asteroids Just Buzzed Earth, One Only A Third Of The Distance From Here To The Moon 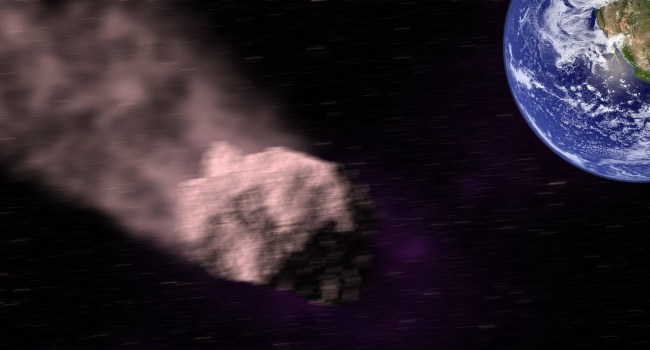 We people of Earth have had a few close calls with asteroids zipping by our planet over the past several years. And those are just the ones we were told about by the government. Who knows how close a giant space rock has actually come to wiping us all out?

It’s not like the governments of our nation and others don’t keep secrets from us when it comes to the goings on in outer space.

On Monday, one space rock, Apollo Asteroid 2020 HP6, came within 0.33 Lunar Distances or 78,082 miles of Earth. That means it flew by at a distance of one-third the distance from here to our moon.

And while it wasn’t the biggest asteroid (it was certainly no Colossal God of Chaos) at somewhere between 21.3 feet and 36 feet across, it did buzz our planet at around an eye-popping 27,335 miles per hour.

In the footage taken below by the Virtual Telescope Project in Italy, Asteroid 2020 HP6 was still about 434,960 miles from Earth.

“The telescope tracked the fast apparent motion of the asteroid, this is why stars show as long trails, while the asteroid looks like a sharp dot of light in the center of the image, marked by an arrow,” said astronomer Dr. Gianluca Masi, head of the Project.

“The very bright star on the right is Zaniah, Eta Virginis. At the imaging time, 2020 HP6 was at about 700,000 kilometers from the Earth and it was safely approaching us.”

Apollo Asteroid 2020 HC5 has an estimated diameter of 85 feet and was traveling over 20,000 miles per hour.

While the final asteroid to cross paths with Earth, Apollo Asteroid 2020 HT1, measures approximately 131 feet wide and was crusing at around 22,000 miles per hour.

According to The Planetary Society, whose sole mission is to decrease the risk of Earth being hit by an asteroid or comet, we shouldn’t lose sleep over anything like that ever happening. Which is nice considering a senior mission advisor for the European Space Agency (ESA), Professor Alan Fitzsimmons of Queen’s University Belfast’s Astrophysics Research Centre, said, “We will get a serious asteroid impact sometime” and “we will need to do something about it.”

Eh, I’m sure everything will be fine. Nobody will miss us either way.

Previous asteroid news…
• Researchers now believe massive interstellar object discovered in 2017 was ‘ripped’ from an alien planet
• Alien expert believes he’s uncovered a extraterrestrial base on an asteroid in NASA image
• NASA is tracking a monstrous asteroid on Earth approach with the potential to wipe us all out
• Head for the bunker, NASA is tracking a giant asteroid on earth ‘approach’
• Heads up, a pack of asteroids is hurtling towards Earth at speeds of up to 27,500 MPH this weekend
• Russia plans to build a base on the moon to track asteroids on a collision course with the Earth
• Space agency expert predicts ‘serious impact’ from an apocalyptic asteroid: we ‘need to do something about it’
• Apocalyptic will hit in the next decade and space agencies are covering it up, says biblical scholar
• NASA reveals 10 dates when Apophis, the ‘Colossal God of Chaos’ asteroid, could smash into Earth
• NASA says city-killer asteroid the size of The Great Pyramid of Giza will have a chance of smashing into Earth in 2022
• A potentially hazardous’ 3,000-foot long asteroid is flying by Earth: here’s how to watch it
• NASA has spotted a giant Apollo asteroid, the most dangerous class of space rock, on a concerning Earth-orbit
• New asteroid detected, named the fourth most dangerous to hitting Earth according to the European Space Agency
• Space agencies are going to crash a spacecraft into an asteroid at over 14,000 mph to see what happens
• Experts warn ‘100 percent’ chance of asteroid colliding with Earth and action needed to prevent mass extinction