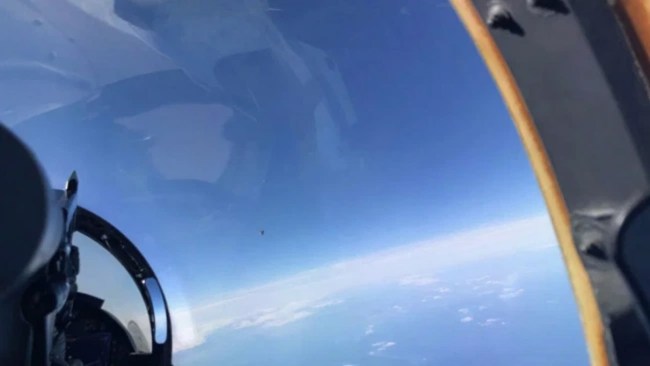 Internet sleuths think they have uncovered the truth about a leaked UFO photo from a secret Pentagon task force, and it’s not at all what many people believed.

The mysterious photo shows some sort of Unidentified Aerial Phenomena, or UAP – as the United States’ Department of Defense (DoD) calls it, flying near a U.S. Navy jet that military officials admitted could be “alien” or “non-human technology.”

The photo itself is said to be considered “Unclassified and For Official Use Only,” however, because the image and accompanying report were shared on a secure Intelligence Community network, the officials we spoke with would only acknowledge it under strict conditions of anonymity. Prior to any agreement, The Debrief did verify these sources were in fact in positions within the U.S. Intelligence Community and under the authority of the U.S. Director of National Intelligence.

Naturally, because this photo, taken by the pilot of an F/A-18 fighter, was such an interesting discovery, the internet went to work trying to figure out what the UFO truly was.

I shared these photos with #UFOtwitter months ago and seemingly nobody cared. Also, people are claiming these were “leaked” this morning on the net. Well… I’ve had them for a long time. ??#blacktriangle @VeilroadDude @BeyondTheVeilI1 @BobMcGwier_N4HY @PostDisclosure https://t.co/ct071ZXZiJ

After much digital enhancement, measuring, and outright speculation many people on the internet now believe the object captured in the photo is … a giant mylar Batman balloon.

Update: r/DavidEgrrr pointed me toward this Balloon. Created a 3D mesh with some deformation and proper position/lighting. The proportions are exact. from r/UFOs

But is it? Is it really?

It sure does appear that is the case. However, numerous folks raised issues that cast a lot of doubt.

According to the DoD report, the photo was taken at around 35,000 feet.

“Try taking a picture of a balloon from your car with your cell phone at 55mph,” wrote one commenter on Reddit. “Now try it at 300mph. Either the balloon is traveling at 300mph ALONGSIDE the jet, or the object is much larger than a $14 balloon.”

“I’m not arguing in favor of the UFO in this instance because I’d like to just see how it pans out, but a point that hasn’t been made is that humans have created so many different things that it basically guarantees a ‘match.’ By finding something that looks very similar to a blurry photo, all you’re really doing is showcasing the amazing ability of humans to think up and create trillions of different trinkets, balloons, drones, kites, parts, etc,” wrote another. “Nobody should be surprised by this, and finding a match should be way less convincing than it is, unless the photo is very clear and the match is undeniable.

“We’ve even created a ton of things that deliberately resemble UFOs. There are giant flying saucer balloons for sale.”

People, it's not a balloon! A photo of this same UAP was released August 25, 1939. pic.twitter.com/Oot6QoJAoE

So, what do YOU think? Has this particular UFO myth been busted?