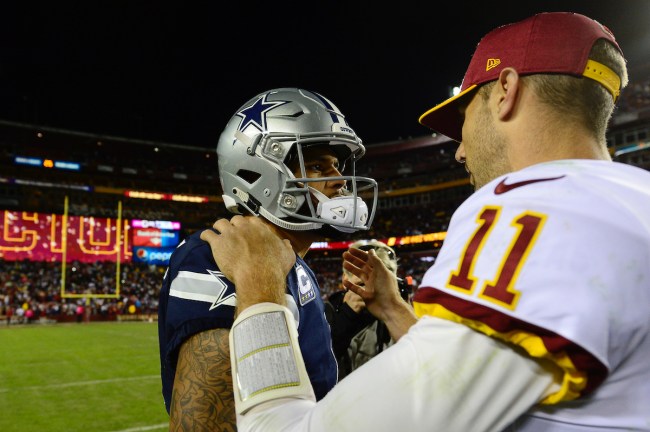 The Dak Prescott injury I witnessed last NFL season was one of the more brutal leg injuries I’ve ever seen. Not only did the Dallas Cowboys quarterback get rolled up on, but because of the position he plays and for whom he plays it for (America’s Team), it made it all the more devastating. When you consider it came during a season in which he was playing on the franchise tag — and was seeking a long-term commitment — if your heart didn’t initially break for the guy, you may not be human.

Then March 8, 2021 happened, and that last image we saw of Dak Prescott being carted off the field while crying to a standing ovation immediately disappeared. That’s because the Cowboys inked their quarterback to a record-setting contract, giving him the most guaranteed money in NFL history. It might be a gamble — considering Prescott had to limp his way to the podium to talk to the press on Wednesday — but all signs are pointing towards him being back in the next few months. It’s a seriously feel-good story.

But it all could’ve gone very differently. Even before the Dak Prescott injury, the quarterback was having a tumultuous year, losing his brother to suicide and actually being bashed by some morons in the media for showing and sharing his emotions. It took a lot of mental fortitude to overcome those types of losses, and, for Prescott, one person who provided inspiration to get back on the field was Alex Smith.

Now, we all know Smith’s story by now: Nearly lost his leg to infection after a nasty leg injury in 2018. He not only worked himself back to the starting lineup for the Washington Football Team last season, but he also guided the team to a playoff appearance, helping him snag the Comeback Player of the Year Award.

Since Alex Smith knew firsthand how damaging a serious leg injury could be on the pscyhe of a player, he apparently gave motivation to Dak Prescott, which is something the Cowboys quarterback appreciated. Just listen to the thanks Prescott gave Smith during the press conference announcing the record-setting contract.

“I have to thank, Alex Smith,” Prescott said. “Because at that moment, when you’re sitting there, and you have an injury like that or you come out of surgery, to see somebody who has already done it and did it actually in worse circumstances, that allowed my mind just to go to straight, ‘Hey, I can do this. I’m gonna beat this. It’s just a matter of time, when are the doctors are saying. But I’m gonna beat this.’

“So I have to thank Alex, for somebody who’s overcome that and won Comeback Player of the Year, and congrats to him.”

"I have to thank Alex Smith…"@Dak speaks to how Alex Smith's recovery inspired his own 💪 pic.twitter.com/zBlItFY6ex

Awesome stuff here from both guys. For Alex Smith to provide the support and inspiration after Dak Prescott’s injury is first-class stuff. And for Prescott to return the favor and thank his fellow quarterback while all the league’s eyes were on him for the contract was equally as cool.

Smith recently became a free agent after the Washington Football Team decided to move on from him. Who knows where he ends up, but, given the respect they have for one another, who knows, maybe the Dallas Cowboys take a flier and sign the former No. 1 overall pick to serve as Prescott’s backup this upcoming season? That would only complete this story even more, and show the support each guy has for one another.