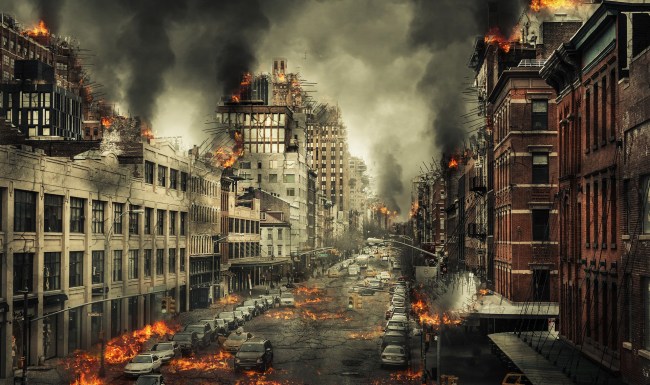 And no, none of the doomsday prophecies we’ve covered in the past like the apocalypses that were supposed to occur in July and September of 2016, the three predictions in January of 2017, again in February, twice in May, and December, then again in January, April and July of 2018, and yet again in June, October and November of 2019, as well as in February and June of 2020, have actually came true.

However, the predicted doomsday date of sometime in the year 2240 is still on the table!

And, AND, now we’ve got another new end of the world date to mark on our calendars! (Might want to use pencil.)

Are you ready? The apocalypse is now going to happen in the year… 2028.

Yes, that is still a ways away, BUT, the ball is supposed to get rolling on it in 2021! At least according to the late Dr. F. Kenton Beshore, former president of the World Bible Society.

For you see, just before the pastor’s passing in 2016, Beshore told his flock that Jesus Christ’s return to Earth was “imminent.”

He even stated specifically that Jesus would be making his triumphant return to Earth in the year 2028.

…before that, pandemonium will strike, he claimed.

The theologian said there were already signs in the Bible that proved the world was nearing the end.

He believed that the two world wars within a century of each other, and the “birth” of Israel, marked an end point.”

Hmmm… what year was Donald Trump elected the 45th President of the United States? You got it. 2016. When did Beshore die? 2016. Coincidence?

And who, shortly after being sworn into office announced that the United States would recognize Jerusalem as the capital of Israel, which could perhaps be construed as signifying the “birth” of Israel? It was Trump. Trump did that.

In fact, Beshore wrote in his 2009 book When: When Will the Rapture Take Place? (available at Amazon and many fine bookstores), “Jesus was saying, in effect, that when you see the birth pains – World War I and II and famines, pestilences and earthquakes – you will know that His return is drawing near.

“The Greek word genea is translated ‘generation.’ It literally means ‘born one.’ Jesus said this ‘born one’ (nation of Israel) will be in existence when He returns.”

In the texts the pastor also predicted a war, with Israel at the centre opposing larger nations such as Iran and Russia while other religions poised to “feel God’s wrath”.

This week, Iran warned Israel not to cross its “red lines” in the Gulf, in what are the final days of President Trump’s Presidency.

It came following reports of an Israeli submarine deployment in the region.

Foreign ministry spokesman Saeed Khatibzadeh stressed the Islamic republic would defend itself against any American military “adventure” in the run-up to the January 20 handover of power in Washington – leading many to fear a burgeoning conflict.

“When these nations come against Israel, God not only defeats these armies, but he sends fire on Russia and Iran and those that dwell securely in the isles,” Beshore wrote.