Fleet Of UFOs Caught On Camera Over California: ‘Something Big Is Going On’ 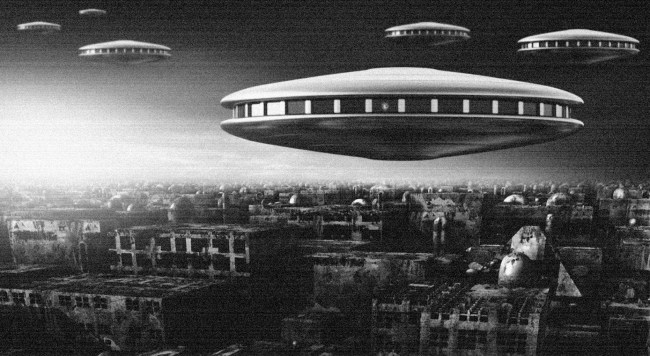 Aliens aren’t even trying to hide these days. The sheer number of UFO sightings caught on camera or spotted in images on the internet is starting to get out of control.

Little wonder people like Miley Cyrus and Demi Lovato have begun openly stating they have been in contact with aliens, and why former Senate Majority Leader Harry Reid and others in governement have gone on record with new admissions about the existence of possible aliens and alien technology.

It’s also no coincidence that all of the sudden we have all these astronomers and astrophysicists making landmark discoveries about the potential existence of alien life on planets like Mars, Venus and Pluto.

Or that it’s now been revealed microscopic aliens may have been visiting Earth, and multiplying, for centuries. Or that scientists now admit that 36 “active” alien civilizations in our galaxy may be trying to contact Earth.

From the person who posted the video…

A friend and I went on our break at Walmart when we noticed a silver looking object crossing the sky. The sun was reflecting off of it as it spun.

At first I thought it was a helium balloon because of the color but then my friend said it stopped moving.

I then went to activate my video recorder on my phone but then noticed a v shaped formation of white lights crossing the blue sky.

I started recording them instead of the the silver thing. The V shaped suddenly changed into a C shape as if on command.

I knew they were not birds because they were moving too fast and these things didn’t have wings flapping. They also stayed in perfect formation even when changing shape.

They looked like tic tacs or oval shaped. No sound or exhaust.

“For the life of me I just could not see any wings on these objects in the sky, but just like the eyewitness…at first I thought it was a flock of birds, but it’s not,” he wrote on his website.

“Guys, this is a lot of UFOs moving fast and low over Oakland, California three days ago. Something big is going on for so many UFO sightings world wide to be occurring.

“UFOs often try to disguise themselves with cloaks, clouds, fog, impersonating planes and even trying to look like birds. Be warned, sometimes what you see…are what aliens want you to see.”

Take a look for yourself and see what you think.

“These are the same ones I see. They spin and light up!” one viewer commented.

• Demi Lovato says she’s been communicating with aliens, shares proof
• Miley Cyrus says she once made eye contact with an alien inside a UFO
• UFO sighting over mountain in Mexico provides ‘best close up’ ever of an alien craft, says expert
• NASA turns camera away as UFO is spotted on International Space Station live stream
• Former Senate Majority Leader Harry Reid reveals ‘UFOs interfered with U.S. nuclear program’ in new documentary
• Three lakes found beneath surface of Mars could be home to alien life on the red planet
• Japanese defense minister issues official protocols to military for UFO encounters; do they know something?
• Signs of life found on Venus? Alien bio-signature discovered by astronomers on Earth’s ‘twin’
• New study says microscopic aliens may have been visiting Earth, and multiplying, for centuries
• New study suggests interstellar space rock Oumuamua ‘could have been sent by aliens’
• Landmark new research claims evidence of alien life may exist under ancient ice sheets on Mars
• Ex-Pentagon UFO program astrophysicist admits examining ‘vehicles not made on this earth’