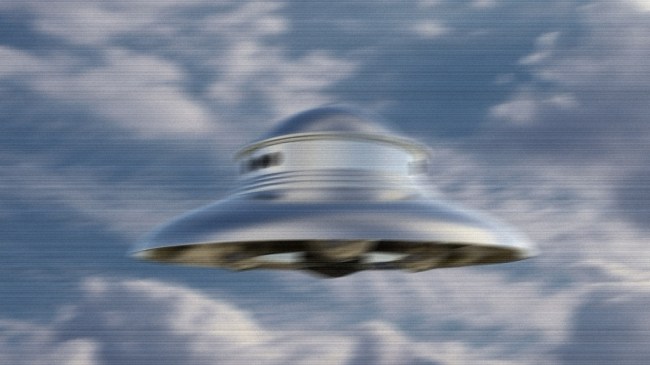 Last week, a video of a UFO sighting began making the rounds on the internet. Nothing out of the ordinary about that these days. It happens all the time.

This video, however, shot on October 1, 2020 in China and shared originally on TikTok, came with a little something extra.

Hard as it is to believe, a UFO being sighted and filmed wasn’t the real highlight of the video.

I messaged a tiktok user @goldninjatw [who] got over 100,000 views the video they posted today.

They said they got it from a friend who recorded it.

In the 5 second video we see a semi truck pulling a trailer and on the trailer is a huge disk with windows all around it.

The disk is very thick on its edge, but its center and thicker around its center.

You can really hear the excitement and astonishment in the mans voice as he exclaims “UFO!”

Also it looks like the driver was so distracted by the UFO that he may have driven right into a light pole in the center of the road. Sure hope he’s ok.

Now the real question is…what are they going to use it for and what is it capable of doing?

Listen… as much as I WANT TO BELIEVE, I think even Mr. Waring was being facetious when he stated that the object in the video below is “absolutely alien technology.”

Then again, maybe I am wrong. When more than one commenter wrote that Waring should Google image search “SAG mill” because they were sure that’s what that part on the flatbed was, he replied, “I googled and no….no windows in that like this one.”

Waring also replied to another commenter who said it wasn’t a UFO, “Its a UFO, but yeah, was funny poor guy.”

Yes, it was funny. Without a shadow of a doubt, and I am still convinces Waring was pulling our chain a little bit, but in no way does this comical video take away from the fact that…

Here’s some REAL UFO and alien news and evidence…

• Three lakes found beneath surface of Mars could be home to alien life on the red planet
• Disk-shaped UFO spotted in the sky over Russia adds fuel to conspiracy theories
• 50 foot tall ‘alien robot’ that could be ‘used in combat’ spotted in Area 51 satellite photo
• Japanese defense minister issues official protocols to military for UFO encounters; do they know something?
• UFO expert discovers ‘alien craft’ that crashed ‘millions of years’ ago in Greenland image
• Signs of life found on Venus? Alien bio-signature discovered by astronomers on Earth’s ‘twin’
• Massive bright light hovers and moves over homes in Florida, sparks strong UFO speculation
• New study says microscopic aliens may have been visiting Earth, and multiplying, for centuries
• New study suggests interstellar space rock Oumuamua ‘could have been sent by aliens’
• Glowing circle shaped UFO caught on video in the sky over London stuns expert
• Landmark new research claims evidence of alien life may exist under ancient ice sheets on Mars
• Ex-Pentagon UFO program astrophysicist admits examining ‘vehicles not made on this earth’