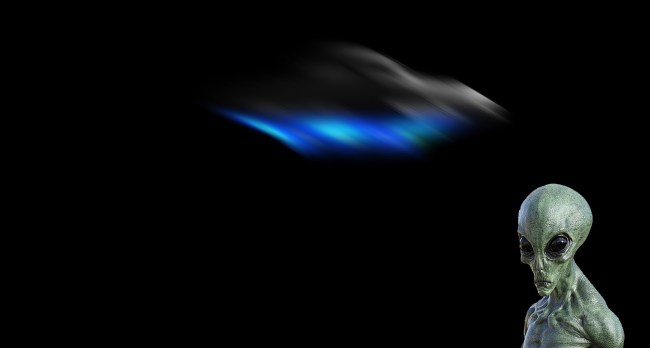 New year, new UFO sighting. As we saw throughout 2020, alien spacecrafts are making little to no effort to conceal themselves these days in the wake of the global pandemic that they may or may not have unleashed on the planet to see how we would respond. (Answer: poorly.)

Now we can add the state of Hawaii to the ever growing list of UFO hotspots as at around 8:30 p.m. on December 29th numerous witnesses reported seeing a large blue glowing object that inexplicably fell from the sky and into the water near Oahu. (Alien bases on Earth are often located underwater.)

According to Hawaii News Now, the UFO sighting resulted in several 911 calls being made.

Not long after, a woman named Moriah spotted what looked like the same object passing over Princess Kahanu Estates.

“I look up and then I was like oh s***!,” she said. “I started calling my husband and them because they were all in the garage. I was like hey. Come look up there. See if you see what I see. They all said yea!”

The 38-year-old says she’s never really been a believer in UFOs, but the bright blue object had them so intrigued they jumped in the car and started following it.

The journey ended less than three miles from where it began. She says they stopped the car on Farrington Highway in front of the Board of Water Supply building after the object appeared to drop into the ocean.

Moriah also reported that in addition to the glowing blue object, she and her husband also witnessed a second white object.

“My husband went look up and he seen the white one coming,” she told HNN. “The white one was smaller. Was coming in the same direction as the blue one.”

Officials from the Federal Aviation Administration (FAA) were contacted about the mass UFO sighting and, as one would expect, claimed there were no aircraft incidents or accidents in that area during that time frame despite multiple witness reports.

FAA spokesperson Ian Gregor did admit to receiving a report from local police that night about a possible plane down in the area “but had no aircraft disappear off radars. And no reports of overdue or missing aircraft.”

In related news, the Pentagon now has less than 180 days to disclose its UFO data thanks to a attachment to the recent COVID-19 relief bill in which the Senate Intelligence committee “directs the [director of national intelligence], in consultation with the Secretary of Defense and the heads of such other agencies… to submit a report within 180 days of the date of enactment of the Act, to the congressional intelligence and armed services committees on unidentified aerial phenomena.”