Justin Timberlake, Who’s Known Kobe Bryant Since They Were Both Teenagers, Shares Heartfelt Tribute To His Friend 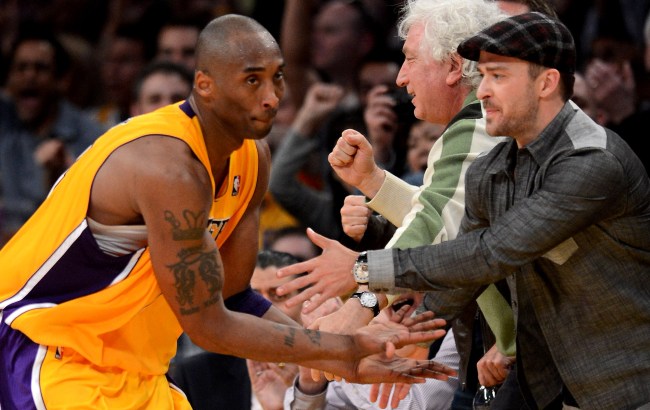 Justin Timberlake is probably one of the handful of people in the world who understands what Kobe Bryant went through as a 17-year-old, going directly from high school into the world spotlight.

Timberlake, like Bryant, was just 17-years-old when he was launched into the stratosphere of celebrity when his band NSYNC released their debut studio album and sold 11 million copies.

NSYNC also began their music career the same year, 1996, that Bryant was drafted by the Hornets and traded to the Lakers.

As they grew older, Timberlake spent many a night at the Staples Center watching Bryant, who was now his friend and contemporary in the fame business.

On Monday, Timberlake shared several photos of himself with The Black Mamba at various events, including one of those games at Staples.

He captioned those photos with a heartfelt tribute to his friend.

“We met when we were both teenagers and bonded over our drive and process. I was in awe of what you could do with a basketball and knew your talent went beyond your physical gifts and stretched to your mentality. A mentality that I would take with me throughout my whole career and still use every day,” Timberlake began.

“As the years went by, I watched you do things that seemed humanly unimaginable. And, through ups and downs, championships and injuries, you still remained with an unwavering resolve about your mentality to remain fierce to competition. But, every time we would speak or text, something started to change… your patience and ease grew. And it inspired me to continue to grow for myself.

“Years passed, and the ‘old man&’ jokes would start to be traded back and forth. We both appreciated a good ‘ribbing.’ We joked about ‘The Vino Club.’ You nicknamed yourself ‘Vino’ to represent how one could age gracefully as a fine wine does. But, you never stopped aiming to inspire me. Your confidence in me was huge – it really affected me because I admired you so much. I don’t mean as one of the greatest athletes ever. I mean as a person.

“People sometimes can confuse a will to win with a lack of compassion. That wasn’t you. You had both qualities. The last conversation that we shared was about being fathers and what that meant. That was, beyond all the things that we could do in this world, our true legacy. Who our children are and what beautiful people they will become. And, I guess right now, without being able to find all the words, THAT father connection is what is most devastating for me.

“I am sending my love to Vanessa and your family and to the families of everyone connected in the mourning of this terrible tragedy. My heart is broken and my family lifts you up in our thoughts and prayers.

“Kobe… You have connected so many of us. The Mamba Mentality will last for all of time. I know that will be a source for me every day as it has been for so many days before. Your legacy is with us. It’s our responsibility to pass it down now. I hope I can continue to make you proud, Vino. Champ, MVP, Legend, Hero, Inspiration, Father, Friend. I’m gonna miss you, brother. Mamba forever.”

Inspiring. As are these thoughts and memories shared by folks like John Calipari, Robert Downey, Jr., Charles Barkley, Giannis Antetokounmpo (who deleted all of his social media accounts after Kobe’s passing) and more.

The last thing Kobe sent to me. Coaching me to be more than a coach! pic.twitter.com/R391dzzlKU

“To my man Cal, Keep leading our young men to GREATNESS. You are more than a coach. You are a teacher of life. Much love to you my brother.”

“First, I want to express my deepest condolences to the families and friends of all nine people killed in this tragedy,” Barkley said in a statement. “I really want to emphasize that in remembrance of the other seven people involved. For me, this is like losing a family member, to lose Kobe and his daughter, Gianna. Basketball is a close knit fraternity and I’m just sad. Really sad. My thoughts and prayers are with Vanessa and their girls, the Lakers family and every basketball fan around the world.”

Milwaukee Bucks star Giannis Antetokounmpo spoke today about his relationship with the late Kobe Bryant. Here's what he had to say. pic.twitter.com/PpzjVnf4Fh