Shaq Talking About Kobe On His Weekly Podcast: ‘I Wish He Was Here. I Wish I Could Say Something To Him’ 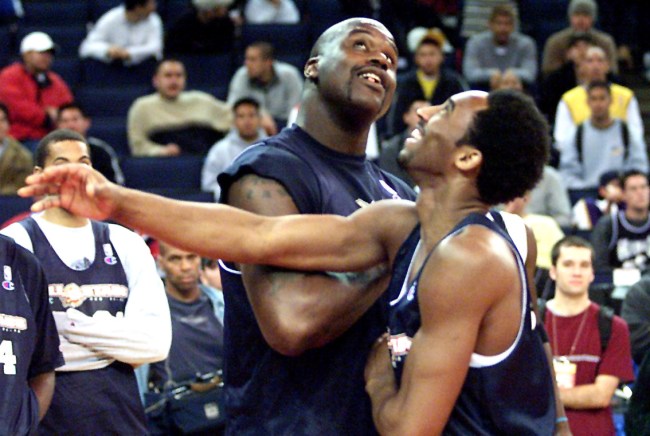 On Sunday, in the aftermath of the crash that killed legendary NBA star Kobe Bryant, his daughter Gianna, and seven others, many of those closest to the future Hall of Famer expressed how hard the loss of The Black Mamba was to them personally.

Among those people were Bryant’s Los Angeles Lakers running buddy from 1996 to 2004, Shaquille O’Neal.

Despite the differences that led to Shaq’s departure from Los Angeles after the Lakers lost in the NBA Finals in 2004 (their fourth appearance in the Finals in five years), Kobe and Shaq eventually reconciled and created a friendship to envy.

Shaq added in a later tweet, “Kobe was so much more than an athlete, he was a family man. That was what we had most in common. I would hug his children like they were my own and he would embrace my kids like they were his. His baby girl Gigi was born on the same day as my youngest daughter Me’Arah.”

On Monday, O’Neal sat down for his weekly podcast, The Big Podcast With Shaq, and as one would expect, he was still grieving hard for his fallen friend.

“I’m not doing well. I’m sick,” said O’Neal. “I’m just getting over the death of my sister. [She passed away from cancer in October.] You guys told me the other day when I came in, I looked like I needed some rest. And I haven’t been sleeping after Ayesha’s death. Because it’s just, you know, not thinking about just the good times but thinking about the times when I could’ve did something, or I could’ve said something, or could’ve did something different, or could’ve loved her more, or I could’ve shown them more support.”

“And the same thing hit when I found out this news,” he continued.” I was downstairs working out with Shaqir when my other son Greg showed me the TMZ clip,” Shaq continued. “And I yelled at Greg, I said, ‘Yo, man, get that sh*t out of my face. Just get it out my face,’ because you know about all the internet hoaxes and all that. I figured someone was just playing around. I’m working out with Shaquir. I didn’t want to believe it.”

“I know some idiot’s going to bring up the relationship me and Kobe had,” Shaq continued. “Our relationship was that of brothers. … When I saw Kobe and his daughters… loved them. He saw my kids… loved them. Look at my kids’ tweet., uh, Instagram. He talked to Shareef yesterday morning.”

“So all this stuff that is documented between us, it was never a dislike,” he said. “Listen, this is what brothers do. I have a younger brother, we fight all the time. But guess what? I love him. And I love Kobe Bryant. I am the first to say, ‘Hey, I got four rings and I know I couldn’t have got three without him.'”

O’Neal went on to say he has been thinking about Kobe being inducted into the Hall of Fame and how disappointed he is that he won’t get to hear, or possibly give, the speech directed at Bryant as he receives the honor.

“People ask me how I feel. Now I gotta go back into not sleeping, not eating, not really functioning and it just hurts. It’s just hard to believe.”

Much like the reaction Kendrick Perkins had to Kobe’s death, Shaq added that he is going to “delete my beef and my confrontation clause. I don’t want to do that anymore. … I just called all people I had discrepancies with and said, ‘Look man, I love you.'”

Shaq had much more to say, but the main gist of it was, “I wish he was here. I wish I could say something to him,” he said.

Prior to Shaq speaking, there was a two-minute and 35 second audio tribute with quotes, great moments, and an emotional look back at Kobe’s career. If you listen to nothing else today, you definitely should listen to that.