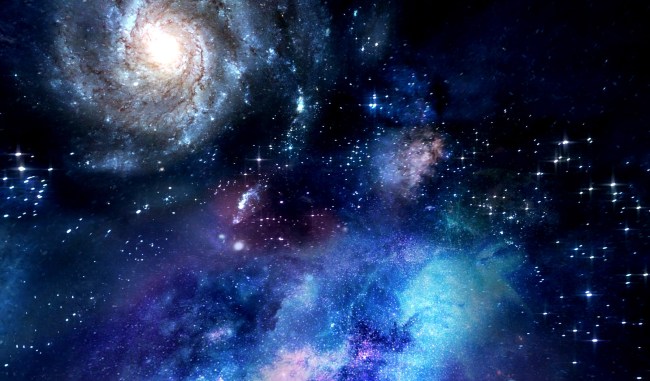 A mysterious and very powerful radio signal emanating from deep space that repeats itself every 16 days was recently discovered by astronomers, providing further proof that “we are not alone.”

Okay, that’s not exactly what they said, but they did make an incredible discovery.

CHIME observed over a cycle of 409 days that this signal repeated itself every 16.35 days, according to a very sciencey report by Science Alert that is very hard to comprehend.

CNN broke it down into smaller words the rest of us can understand.

Last year, the CHIME/FRB collaboration detected the sources of eight new repeating fast radio bursts, including this signal. The repeating signal was traced to a massive spiral galaxy around 500 million light-years away.

Researchers hope that by tracing the origin of these mysterious bursts, they can determine what caused them. So far, they have traced single and repeating fast radio bursts back to very different sources, which deepens the mystery.

Okay, that was just me again. But you know it’s true.

In the paper, the researchers consider the possible causes, like the orbital motion of a star or an object that acts as a companion in the outskirts of the galaxy. The authors of another paper, who consulted with the researchers who discovered the pattern, suggest the cause could be coming from a neutron star and early OB-type star binary system.

“If it were an alien beacon, I would think it would emit more quickly because a 16-day period is not efficient for communication,” Leon Oostrum of the Netherlands Institute for Radio Astronomy told New Scientist. “Imagine getting one signal every 16 days — it would take forever to get a message.”

Further evidence…
• Mind-blowing new book puts forth theory that UFOs may actually be crafts piloted by time-traveling humans
• New documentary provides a very strong argument that aliens exist and are living among us
• Glowing UFO spotted on NASA live stream of the Space Station sparks more claims aliens are real
• Britain’s first astronaut says aliens definitely exist and they could already be among us
• UFO expert says glass dome inexplicably levitating over meteorite in Russia may have released alien tech
• Navy pilot who filmed USS Nimitz UFO encounter breaks his silence after 15 years
• Top researchers claim U.S. military is covering up their own super advanced aircraft by making people believe it is a UFO
• Mysterious hovering orbs over Mesa have many believing they spotted a glowing UFO
• UFO seen by 100+ people hovering in the California sky for five minutes sparks alien concerns
• A stationary UFO recorded in the South Carolina sky sparks secret government surveillance theory
• Former head of MI6, who’s allegedly part of a secret global conspiracy on UFOs, says he believes aliens do exist
• UFO expert claims ISS video is ‘100% proof’ NASA, Russia know aliens visit the space station
• Bug expert declares there are insects on Mars and then suddenly deletes research after backlash
• UFO expert claims to have video proof of a fleet of alien spaceships passing by our moon
• 5 Navy veterans and new anonymous source who witnessed the USS Nimitz UFO incident come forward to reveal what they saw
• Retired Air Force Major says a space alien was shot and killed at a base in 1978, government covered it up
• US Navy pilot David Fravor who claims to have witnessed a UFO says the tapes of the encounter have disappeared
• Eyewitnesses spot identical fleet of UFOs in the sky over Utah and North Carolina in the same day
• UFO expert says he has ‘100% proof’ that aliens currently live in a ‘city’ on our moon
• Red triangular craft recorded hovering in the Texas sky is perhaps the ‘clearest UFO footage’ ever
• Top Gun Navy pilot describes his incredible UFO encounter on ‘The Joe Rogan Experience’
• A strange ‘fleet’ of 14 glowing UFOs was spotted and caught on camera off the coast of North Carolina