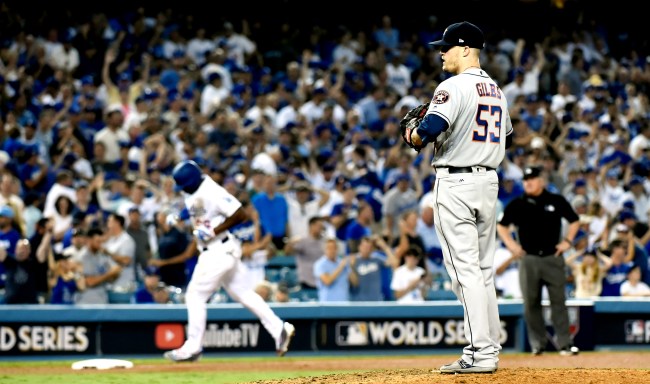 So far, after months of criticism, of all the players who won World Series rings with the Houston Astros in 2017, only one player has even flirted with the idea of returning it because of the way the team cheated to win it and that’s the guy who blew the whistle on the whole thing Mike Fiers.

That changed over the weekend when former Astros reliever and current Blue Jay Ken Giles told the Toronto Star that he would be willing to return his ring as well.

Giles, who recorded 34 saves for the Astros in 2017, plus two in the postseason before melting down and giving up 10 earned runs in the World Series, claims he wasn’t aware of the team’s cheating because he spent all his time in the bullpen.

“I was not aware about anything,” Giles states flatly. For this ex-Astro, so notoriously hard on himself that he once socked himself in the jaw after giving up a three-run ninth-inning homer, the refutation sounds genuine. “It crushed me to learn about the stuff that went on when I was there. I had no idea. I had no clue whatsoever. I was blindsided by the commissioner’s report. Up until then, I honestly didn’t believe it. Just crazy.”

As far as giving his ring back, Giles said, “Whatever they ask, I would oblige. Because what was going on at the time was not okay,” adding, “It just hurts. If they want it back, I’ll be true to whatever needs to be done.”

That’s not going to happen. (1) The MLBPA will never allow it, and (2) MLB commissioner Rob Manfred is too weak of a leader to even attempt to do it.

But it’s nice of Giles to offer, and more than anyone other than Mike Fiers has done.

“I feel awful, how the guys are being punished,” Giles admitted. “They’re great people, they really are, and great ballplayers. But I guess sometimes you just have to roll with it. Either be quiet or speak up and tell the truth. Go out there and perform, show them what you’re made of. Competition-wise, it’s going to be harder, in all of baseball, because now they’ll want to show that it’s man to man and not just computer to computer.”

As it should be.

“The damage is already done. There’s nothing you can do about it. They have to move past it,” Giles said about his former teammates. “They’re going to feel like the bad guys all year. I know what it feels like to be the bad guy. And it’s not the greatest feeling. But actions speak louder than words. I just hope they play honestly.”