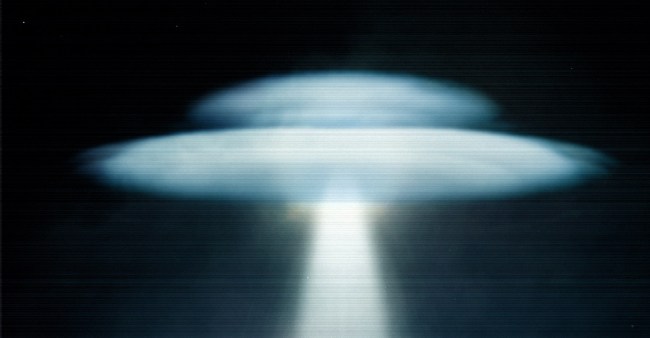 Aliens, as we have learned from past UFO sightings, like to hide their bases of operations in places like volcanoes, the moon, and underwater. That way they can keep tabs on us Earthlings from a close distance while still making it difficult for them to be discovered.

In addition to North Carolina, off the coast of Florida is one of the more popular locations for aliens to headquarter in North America.

All of which makes it not very surprising that there were multiple reports of a UFO being spotted over West Palm Beach, Florida this week.

Spotted just off the Treasure Coast, numerous area residents took to social media with accounts of what they had witnessed.

#Mysterious object in the sky over South #Florida tonight. Getting many calls and emails. Around 6:30pm. This video is looking east from Brian Goodale in #HobeSound. Even seen in the Bahamas pic.twitter.com/vuBvJHVMjg

I drew this on a napkin immediately after. I saw this object flying clear as day right before my eyes. Never seen anything like it!! pic.twitter.com/YX4eyMUjYR

UFO and alien expert Scott Waring saw these videos and offered his take on the mysterious sighting.

“Orb look like it was traveling slowly after a few minutes and airliner seem to be headed right for it,” one eyewitness wrote. “The airliner had to make a hard bank left to avoid it just then it disappeared/ This is all verified in the video.”

Waring, after watching the video, wrote on his website…

Now here is something you don’t see everyday. In Florida a man and woman were driving down West Palm Beach when they noticed a white cone in the sky with a shiny object moving around it.

The small object is a single engine plane that happened to be in the area and got curious about this huge white cone in the sky.

The white cone begins to fade and the shiny object which has wings and a light at each wingtip, seems to be investigating the white cone.

But the white cone quickly fades more and more as if it were a UFO cloaking to hide itself.

This is a common practice of UFOs that believe they are going unnoticed, but when they realize they were wrong and that someone was watching them on the ground, they cloak which looks like the object becoming transparent more and more until its totally gone.

Absolute proof UFOs can cloak…right in front of our own eyes and totally get away with it.

Another eyewitness filed this report on the Mutual UFO Network, or MUFON…

I was driving down the road and I noticed an airplane in the sky, just behind the airplane I noticed a stationary disc, very brightly lit with a cloud formation around it. The disc and cloud formation appeared to be perfect, like something out of this world. The disc was stationary, although I cannot tell whether it rotated in place as I was driving but the disc did not move in a line, it then disappeared and so did the cloud shortly thereafter in the same exact location which I observed it.

Speculation about the UFO ranged from it being a stray submarine-launched ballistic missile (which is exactly what they would want us to think) to an alien portal (more likely).

We all know the truth, however, because…

More recent UFO and alien news and evidence…
• Harvard’s top astronomer claims there are over a quadrillion UFOs in space
• 2 million pages of CIA declassified ‘Black Vault’ documents about UFOs now available online
• New Area 51 images taken by pilot show strange triangular object inside an open hangar
• Harvard astrophysicist says alien tech visited Earth in 2017 – and it’s just the beginning
• Astronomers track source of mysterious radio signals to a location within our galaxy
• NASA announces water has been discovered on the moon, bringing us one step closer to proof of alien existence
• Former Senate Majority Leader Harry Reid reveals ‘UFOs interfered with U.S. nuclear program’ in new documentary
• Three lakes found beneath surface of Mars could be home to alien life on the red planet
• Japanese defense minister issues official protocols to military for UFO encounters; do they know something?
• Signs of life found on Venus? Alien bio-signature discovered by astronomers on Earth’s ‘twin’
• New study says microscopic aliens may have been visiting Earth, and multiplying, for centuries
• New study suggests interstellar space rock Oumuamua ‘could have been sent by aliens’
• Landmark new research claims evidence of alien life may exist under ancient ice sheets on Mars
• Ex-Pentagon UFO program astrophysicist admits examining ‘vehicles not made on this earth’