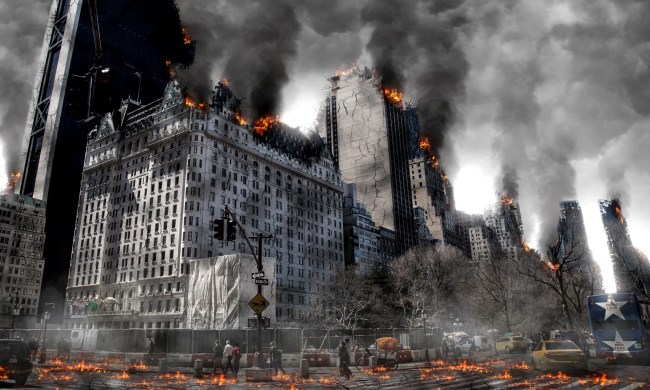 So far, the human race’s batting average when it comes to predicting the end of the world is downright awful. Not that anyone seems to really care when or even if it happens.

We have whiffed on doomsday prophecies that were supposed to occur in July and September of 2016, the three predictions in January of 2017, again in February, twice in May, and December, then again in January, April and July of 2018, and yet again in June, October and November of 2019, as well as in February and June of 2020, none of which actually came true.

Plus, we now can add a prediction by a pair of scientists whose research was recently published in the journal Scientific Reports in which they give humanity a 10 percent chance of not having civilization come to an end with the next few decades.

Theoretical physicists Dr. Gerardo Aquino of the Alan Turing Institute in London and Professor Mauro Bologna of the University of Tarapacá in Chile believe, based on their research, that at the current rate of global deforestation the “irreversible collapse” of human civilization will occur within the next two to four decades.

They also predict that at the current rate of deforestation, all of the forests on the entire planet will disappear in approximately 100 to 200 years.

It’s pretty hard for humans to survive without forests as the study states “it is highly unlikely to imagine the survival of many species, including ours, on Earth without [forests].

It wouldn’t take that long, however, for this situation to become a real problem for humanity.

“Clearly it is unrealistic to imagine that the human society would start to be affected by the deforestation only when the last tree would be cut down,” reads the report.

It continues, “Calculations show that, maintaining the actual rate of population growth and resource consumption, in particular forest consumption, we have a few decades left before an irreversible collapse of our civilization.”

This is where the less than 10 percent chance of survival comes into play as they state “statistically the probability to survive without facing a catastrophic collapse, is very low.”

Thus, the researchers conclude, “Our model shows that a catastrophic collapse in human population, due to resource consumption, is the most likely scenario of the dynamical evolution based on current parameters…. we conclude from a statistical point of view that the probability that our civilization survives itself is less than 10 percent in the most optimistic scenario. Calculations show that, maintaining the actual rate of population growth and resource consumption, in particular forest consumption, we have a few decades left before an irreversible collapse of our civilization.”

Maybe Denver Nuggets star Michael Porter, Jr. wasn’t so crazy after all, hmmm? (Okay, he probably was, but in the immortal words of the wise sage O.J. Simpson, I’m just sayin’…)

Related…
• Doomsday prophecy claims World War 3 is coming and all the signs are already in place
• Bible scholar has finally figured out when the end of the world will actually happen, maybe
• Researchers claim chances of a ‘massive’ disaster worse than coronavirus are just 1-in-3
• Planet X, AKA doomsday planet Nibiru, has returned, sparking more end of the world theories
• Conspiracy theorists tie Nibiru, AKA hidden doomsday Planet X, to the current pandemic
• Uh oh, a ‘doomsday vault’ buried deep in the Arctic just added a bunch of supplies in preparation for the apocalypse
• Apocalyptic asteroid will hit in the next decade and space agencies are covering it up, says biblical scholar
• Humans could become extinct in the near future and most people don’t really care, says new study
• The University of Oxford has disturbing news about the chance of human extinction within the next year
• Experts claim the apocalypse is closer than we think as a ‘zombification’ parasite may have already infected humans
• Mayan calendar researcher says new calculation suggests ‘serious problems are coming our way’
• Expert predicts the human race will become extinct in the next 760 years, so that kind of sucks