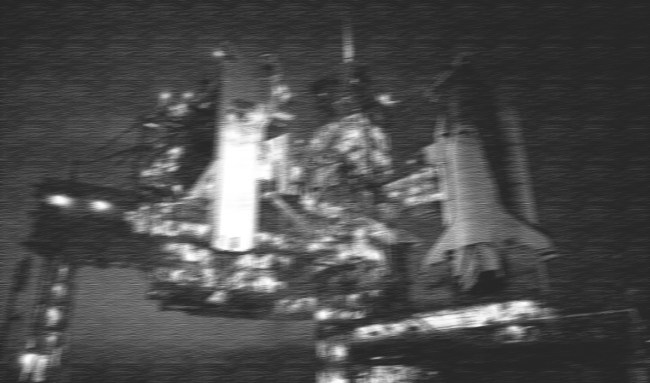 According to details recently reported by the Daily Express, “The U.S. Air Force has a top-secret mission in space that uses an old NASA project to ‘test hardware’ in the cosmos before officially launching it.”

That information was shared by astrophysicist Scott Manley with his 1.03 million subscribers on his popular YouTube channel. (Manley notes in his bio that he is not a professional YouTuber, he has a day job, and doesn’t take sponsored content for his videos.)

In his video titled “Everything We Know About The U.S. Air Force’s Secret Space Plane – The X-37B,” Manley discusses the classified missions that the Air Force has been carrying out for the past 10 years in low Earth orbit using a small reusable robotic space plane designated X-37B.

Manley, who holds a Masters in computation physics, states in the video while discussing the history of the plane, “NASA’s X-37 would see its first flight in 2005, carried under the White Knight, the carrier aircraft that would take the spaceship one vehicle to its launch altitude, where it would perform its prize-winning flights.

“So it did several captive carry tests and in 2006 they finally got to drop it and test it and the thing flew beautifully under a fully autonomous control, it aimed for the runway, it put itself down gently in the center of the runway and ran off the end where it sustained some minor damage.

“But not to be too perturbed by this they did repair it, went back, did another couple of test flights and these were flawless. And so having proved the technology the program worked up.

“But two months after that, the Air Force, finally having seen the error of their ways, announced they would be building the X-37B, a fully capable orbit vehicle. At that point, everything went quiet, because it was a super classified Department of Defense project.”

Telescopic recording of X-37B / OTV-5 space plane in orbit on June 29, 2019 that has not yet been released #X37B #OTV5 @SPACEdotcom @DutchSpace @planet4589 @SpaceflightNow @SpaceNews_mil pic.twitter.com/DIYB1167Z7

Manley also revealed some of the X-37B’s specs, saying, “For maneuvering in space there’s a set of reaction control thrusters fore and aft, all integrated neatly into the surface and there’s a single large engine at the rear.

“Now it’s unusual for this because the single engine isn’t actually square on the rear, it’s offset to the right a little. But it does of course still aim through the center of the mass.

“The original NASA design called for a pair of engines which would be using hydrogen peroxide and JP8, which is another variety of kerosene. The Air Force version supposedly uses monomethylhydrazine and dinitrogen tetroxide and that’s why after it lands the first people that approach it are wearing fully self-contained life support suits, because of course, hydrazine is scary stuff.”

The US Air Force has released the first images of the X-37B on the Shuttle Landing Facility runway following its landing in the early hours this morning after spending 780 days in space. pic.twitter.com/pTJ5ilYP3l

“As far as I know the actual engine has not been revealed, but it’s probably a pressure fed system that gets 700 to 900 Newtons of thrust,” he continued. “There is no cockpit, or windows, or anything like that for people inside, but there is a payload bay door that is a couple of meters long.”

Manley states that “so far, there have been five flights with this vehicle, and we know that there are two separate vehicles that have been identified due to subtle differences in their hardware.”

He also says in the video that he believes “what they are doing is testing hardware for future satellites.”

“They can test the electronics, sensors, propulsion, thermal control systems and then return it to Earth,” he states. “So they can really assess how it performs in space and how it degraded over time.”

“NASA does this all the time on the Space Station, but of course the Space Station is an international project with people from all over the world and the Department of Defense no doubt would prefer to keep their new special high-tech toys away from any prying eyes that are not classified U.S. citizens.”

More fascinating space stuff…
• First images of ‘potentially hazardous asteroid’ on Earth close approach revealed; how to watch it fly by
• ‘Black Triangle’ UFO spotted orbiting the sun on NASA video: ‘This is an alien space station’
• NASA is tracking a monstrous asteroid on Earth approach with the potential to wipe us all out
• NASA live cam catches UFO flying near International Space Station on video
• Darting UFO recorded on NASA live stream shows ‘proof’ the International Space Station is being watched
• Mind-blowing new book puts forth theory that UFOs may actually be crafts piloted by time-traveling humans
• Head for the bunker, NASA is tracking a giant asteroid on earth ‘approach’
• Heads up, a pack of asteroids is hurtling towards Earth at speeds of up to 27,500 MPH this weekend
• Glowing UFO spotted on NASA live stream of the Space Station sparks more claims aliens are real
• Newly declassified CIA intelligence report reveals new info about 1973 UFO sighting at ‘Site 7’ in Russia
• UFO that ‘nearly hits’ a SpaceX satellite during live stream is ‘100% proof aliens are watching,’ says expert
• Top researchers claim U.S. military is covering up their own super advanced aircraft by making people believe it is a UFO
• Russia plans to build a base on the moon to track asteroids on a collision course with the Earth
• Space agency expert predicts ‘serious impact’ from an apocalyptic asteroid: we ‘need to do something about it’
• Bug expert declares there are insects on Mars and then suddenly deletes research after backlash
• UFO expert claims to have video proof of a fleet of alien spaceships passing by our moon
• Apocalyptic will hit in the next decade and space agencies are covering it up, says biblical scholar
• NASA reveals 10 dates when Apophis, the ‘Colossal God of Chaos’ asteroid, could smash into Earth
• Retired Air Force Major says a space alien was shot and killed at a base in 1978, government covered it up
• UFO expert says he has ‘100% proof’ that aliens currently live in a ‘city’ on our moon
• NASA says city-killer asteroid the size of The Great Pyramid of Giza will have a chance of smashing into Earth in 2022
• A potentially hazardous’ 3,000-foot long asteroid is flying by Earth: here’s how to watch it
• NASA has spotted a giant Apollo asteroid, the most dangerous class of space rock, on a concerning Earth-orbit
• New asteroid detected, named the fourth most dangerous to hitting Earth according to the European Space Agency
• Space agencies are going to crash a spacecraft into an asteroid at over 14,000 mph to see what happens
• Experts warn ‘100 percent’ chance of asteroid colliding with Earth and action needed to prevent mass extinction