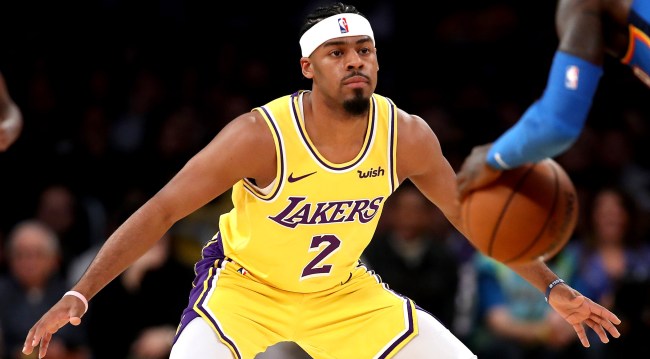 In the immediate aftermath of the news that Kobe Bryant, his 13-year-old daughter Gianna, and seven others had been killed in a helicopter crash, the first member of the team with which The Black Mamba made his name to make an appearance in public was current Los Angeles Lakers guard Quinn Cook.

The 26-year-old Cook, who joined the Lakers in June after three seasons with the Mavericks, Pelicans, and Warriors, showed up looking completly heartbroken as he joined fans mourning the NBA icon at the Staples Center the day after Bryant’s death.

On Wednesday, it was revealed that Cook, who has worn the number 2 since joining the Lakers will be changing his number to 28 in honor of Gianna “Gigi” Bryant.

Lakers guard Quinn Cook is changing his number from No. 2 to No. 28 to honor Gianna Bryant, combining Gigi's No. 2 and Kobe's No. 8, sources tell @TheAthleticNBA @Stadium.

“Number 2 is Gianna’s number. I feel it should be retired. It’s hers,” Cook told The Athletic.

Lakers guard Quinn Cook tells @TheAthleticNBA @Stadium: “No. 2 is Gianna’s number. I feel it should be retired. It’s hers.” https://t.co/8s1ByqrFnm

Cook wrote on Instagram, “💔💔my hero man. I’m completely crushed. I haven’t cried this much or been in this much pain since I lost my dad in 2008. Yesterday I lost my hero, my idol, & the main reason my love for this game is where it is today. Can’t really process this but we all are devastated and heartbroken about what happened to my hero Kobe & his beautiful daughter Gianna.

“You taught us all so much on and off the court. Anyone who knows me knows what Kobe means to me and to the entire world. We need to give all of our energy and prayers to the Bryant family and all the families involved in the tragic event yesterday.

“I will never get over this, I don’t know what’s going to happen going forward but one thing I know is that Kobe and Gianna are up there in heaven TOGETHER smiling down on us all. You were the greatest I’ve ever seen on the court but you were an even better Father to all four of your daughters man. Wow Bean I’m really writing this right now 💔💔. I will cherish our relationship and everything you told me forever. We are already missing you Kobe and Gigi🙏🏽🙏🏽! RiP DAD!”

The University of Connecticut women’s basketball team made Gianna Bryant, nicknamed “La Mambacita” – a name that Kobe was in the process of trademarking – an honorary member of their roster on Tuesday, creating a special number 2 jersey (the number she last wore) with her name on it and placing it on their bench. Gianna had told her dad Kobe that she was going to eventually play for the Huskies.

Reggie Miller tries to convince Kobe Bryant to send his daughter to play basketball at UCLA but he says she is hellbent on going to UConn. pic.twitter.com/zz1D5SbFe8

The Lakers are currently scheduled to host the Portland Trail Blazers on Friday night. The game will be aired on ESPN at 10:30 p.m. ET.