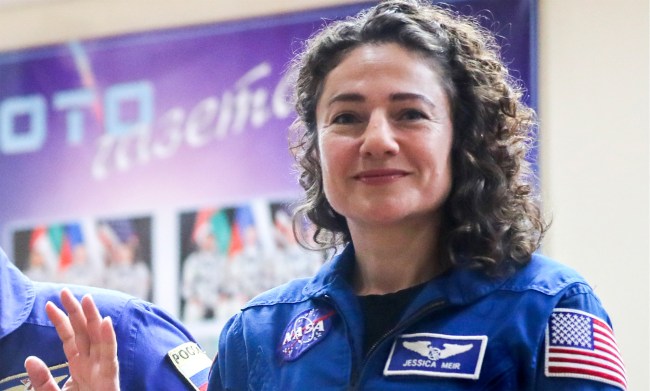 About the only people more fun to get into arguments with on the internet other than PETA supporters and anti-vaxxers are the Flat Earth Truthers.

Noted people who have been accused in the past of being members of the Flat Earth Society include NFL quarterback Geno Smith, NBA star Kyrie Irving, rapper B.o.B., and NBA Hall of Famer Shaquille O’Neal.

The debunkers win there.

Flat Earthers have at various points in the past claimed that our planet is actually shaped like a donut, threatened to kill a friend with a crossbow for arguing about it, and blasted off in a homemade rocket in a search for “the truth.”

In fact, they are so dedicated to their Flat Earth beliefs that when NASA astronaut Jessica Meir recently tweeted some photos from the International Space Station (ISS) of Earth looking very, very round, they were not having it.

The first orientation may make more sense to you, but to me this is the ever-changing skyline on @Space_Station (photo 3). Perspective. The constant traffic of visiting vehicles makes for diverse vistas. Now the #Canadarm2 keeps #Cygnus company after @SpaceX #Dragon’s departure. pic.twitter.com/jfLMcDaf8R

Explain why the station is round too, oh yeah fish eye lens pic.twitter.com/FnSpU571GW

Nice try with the fish eye, but it's flat.

I don't believe you're up there!! Also how r u able to use Twitter? Genuinely wanna know *yep I'm a flat earther. Loud n proud 😉😂

Not everyone who responded is crazy thought Meir was trying to pull a fast one, however.

Can someone please sponsor a mission to fly all these flat-earthers to space so they can all shut up once and for all? Actually, that would be a huge waste because they still wouldn’t be convinced.

Can you all start randomly picking flat earth believers to go on missions. Like once per month. Fly them up, let them take photos, their cameras, whatever and let them prove to themselves that earth isn't flat..

If this is about the cost.. no one said it had to be a round trip

There should be mandatory sterilization of flat earth people. We need to stop the spread of their stupidity

Related…
• Glowing UFO spotted on NASA live stream of the Space Station sparks more claims aliens are real
• Newly declassified CIA intelligence report reveals new info about 1973 UFO sighting at ‘Site 7’ in Russia
• Navy admits it has additional ‘top secret’ footage of USS Nimitz UFO encounter but won’t release it
• UFO sighting? Mysterious object leaving a fiery trail in the sky spotted by multiple people in Florida
• Navy pilot who filmed USS Nimitz UFO encounter breaks his silence after 15 years – Tic Tac craft broke laws of physics
• UFO that ‘nearly hits’ a SpaceX satellite during live stream is ‘100% proof aliens are watching,’ says expert
• Top researchers claim U.S. military is covering up their own super advanced aircraft by making people believe it is a UFO
• Mysterious hovering orbs over Mesa have many believing they spotted a glowing UFO
• UFO seen by 100+ people hovering in the California sky for five minutes sparks alien concerns
• A stationary UFO recorded in the South Carolina sky sparks secret government surveillance theory
• Former head of MI6, who’s allegedly part of a secret global conspiracy on UFOs, says he believes aliens do exist
• UFO expert claims ISS video is ‘100% proof’ NASA, Russia know aliens visit the space station
• Bug expert declares there are insects on Mars and then suddenly deletes research after backlash
• UFO expert claims to have video proof of a fleet of alien spaceships passing by our moon
• 5 Navy veterans and new anonymous source who witnessed the USS Nimitz UFO incident come forward to reveal what they saw
• Retired Air Force Major says a space alien was shot and killed at a base in 1978, government covered it up
• US Navy pilot David Fravor who claims to have witnessed a UFO says the tapes of the encounter have disappeared
• Eyewitnesses spot identical fleet of UFOs in the sky over Utah and North Carolina in the same day
• UFO expert says he has ‘100% proof’ that aliens currently live in a ‘city’ on our moon
• Red triangular craft recorded hovering in the Texas sky is perhaps the ‘clearest UFO footage’ ever
• Top Gun Navy pilot describes his incredible UFO encounter on ‘The Joe Rogan Experience’
• A strange ‘fleet’ of 14 glowing UFOs was spotted and caught on camera off the coast of North Carolina