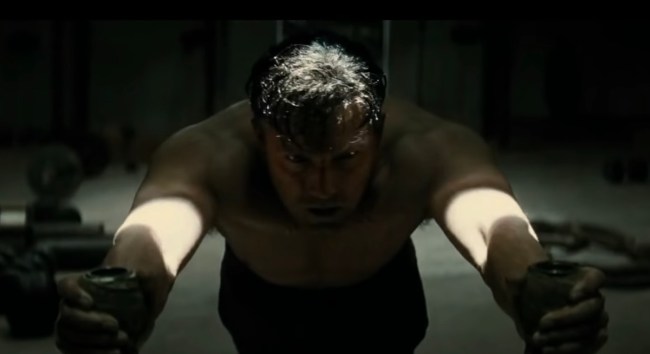 Everyone loves a good workout montage in an action movie.

Guys love it because it’s motivating as hell and gives ideas to try at the gym or at home. Women love the workout montage because every training montage involves few minutes of a hot, sweaty, shirtless movie star working out.

Brandon and Hudson White, aka YouTube’s Buff Dudes, love a good movie workout montage because they love trying it out for themselves. The brothers recently did the Rocky IV training montage and decided to attempt Bruce Wayne’s intense workout from Batman v. Superman.

Round one of the Bruce Wayne Billionaire Workout involves taking a 20-pound sledgehammer to a tractor tire as many times as possible to failure.

Next comes pullups, first performed with just bodyweight before adding up to 75 pounds.

The guys attempt a pull-up with 150 pounds dangling from their waists.

Next up on the workout that will turn any guy into Batman is a sled push loaded up with 365 pounds and a tire pull.

The next exercise is a dumbbell bench press, performed at 100 pounds to failure.

The guys admit they’re too damn tired to attempt the final exercise – a 765-pound squat.